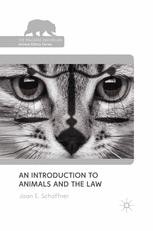 An Introduction to Animals and the Law

This exploration of the newly emerging, diverse, and controversial area of animal lawpresents a basic survey of the laws designed to protect animals, analyzing and critiquing them, and proposing a future where the legal regime properly recognizes and protects the inherent worth of all animals.

'A well- written and wide ranging addition to the growing animal law canon. This work provides a valuable resource to students, researchers, lawyers, judges, advocates, and academics. It offers insight into animal law that it is useful to non lawyers as well. The book explores the most important themes in animal law while addressing the fundamental theories upon which that work is based.' - Kathy Hessler, Lewis & Clark Law School, USA

'Rather breath taking in scope, this new scholarly book by Professor Schaffner seeks to introduce the reader to the world of animal law, ethic and public policy. While there is a primary focus on the US, the book also includes a number of issues and examples from around the globe. It is more complex than a simple recitation of the present law, as it also is a critic of the failures of the present system and an introduction to the ethics which support enhancing the legal status animals. It is an excellent introduction to the complex and contradictory world of animal law, ethics and public policy.' - David Favre, Michigan State University College of Law, USA

'...fact-filled and tremendously useful...By detailing the inconsistencies and absurdities of animal law as it is currently practiced, Schaffner has provided activists with a valuable tool for engaging in legislative advocacy. As a source of information, a critique of current law, and most importantly a manifesto for a future world in which animal law protects the interests of animals rather than the interests of humans in using animals, An Introduction to Animals and the Law is a vital resource for anyone who wants to change the world for animals and lives within a nation of laws...' - The Hen House