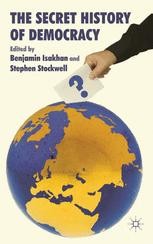 The Secret History of Democracy

This book explores the intriguing idea that there is much more democracy in human history than is generally acknowledged. It establishes that democracy was developing across greater Asia before classical Athens, clung on during the 'Dark Ages', often formed part of indigenous governance and is developing today in unexpected ways.

MOHAMAD ABDALLA Founding director of the Griffith University Islamic Research Unit and a co-director of the National Centre of Excellence for Islamic Studies, Australia LARISSA BEHRENDT Professor of Law and Director of Research at the Jumbunna Indigenous House of Learning at the University of Technology, Sydney, Australia PATRICIA PIRES BOULHOSA has held the Snorri Sturluson Icelandic Fellowship, and in 2006 delivered the Jón Sigurðsson Memorial Lecture POPPY FRY Assistant Professor of History at Saint Anselm College in Manchester, New Hampshire, USA. K. LUISA GANDOLFO Researcher affiliated to the Centre for Middle Eastern and Mediterranean Studies at the Panteion University in Athens, Greece BENJAMIN ISAKHAN Research Fellow with the Centre for Dialogue at La Trobe University, Australia JOHN KEANE Professor of Politics at the University of Westminster, UK and at the Wissenschaftszentrum Berlin, Germany PAULINE KEATING Senior Lecturer in the History Programme at the Victoria University of Wellington, New Zealand IMMACULATE KIZZAProfessor of English at The University of Tennessee at Chattanooga, USA STEVEN MUHLBERGER Professor of History at Nipissing University in North Bay, Ontario, Canada PHILIPPE PAINE Independent Canadian scholar who has researched and written on the cross-cultural history of democracy for two decades HALIM RANE Deputy Director of the Griffith University Islamic Research Unit, Australia STEPHEN STOCKWELL Professor of Journalism and Communication, at Griffith University's, Australia

'This exciting book surely enlivens and enriches our debate on democracy and its future by digging afresh oft-forgotten, yet most enlightening democratic experiences found in human history.' - Takashi Inoguchi, Professor Emeritus, University of Tokyo and President of the University of Niigata Prefecture, Japan

(past and present), Ancient India and China, Medieval Iceland and the Early Venetian Republic, Uganda and South Africa, (Aboriginal) Australia and (for the Me´ tis people of Western) Canada. A fascinating picture emerges of indigenous traditions upon which to build a democratic system in which collective decisions are made with free debate, where government consultation

includes broad participation of equals, and democracy is a creature of the people rather than window-dressing by the one or few really in charge' Roland Axtmann, Australian Journal of Political Science

'This is an interesting and worthwhile addition to the slowly growing literature on the global history of democracy. In redirecting our gaze away from the standard historical reference points, it offers an important corrective to the common tendency of identifying

democracy as a Western product. This volume pushes us to question accepted thinking on the topic, and suggests that the past may be one route towards a more democratic future.' Christopher Hobson, Global Change, Peace and Security

'The thought-provoking essays gathered in The Secret History of Democracy provide convincing evidence that democratic mechanisms have been invented many times and in many places, including times and places neglected in common accounts. This collection is a sobering reminder that democratic practices have often been succeeded by something else. But one also takes away a sense of the dynamic character of democratic history and the endless diversity of practices with some reasonable claim to embody democratic principles. As growing numbers wonder about what sorts of political institutions make sense in the face of the enormous problems confronting the twenty-first century, this demonstration of the long human history of political creativity gives some reason for hope.' -John Markoff, Professor, University of Pittsburgh, USA

'A fascinating, thought-provoking and well-informed survey of little-known 'roots of democracy' and 'proto-democratic' systems and movements across the globe , from ancient and 'primitive' to modern societies. An eye-opener that forces us to differentiate more carefully and to rethink the history of democracy.' - Kurt Raaflaub, Emeritus Professor, Brown University, USA