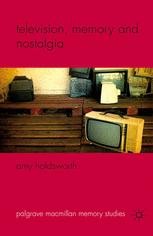 An innovative and original new study, Television, Memory and Nostalgia re-imagines the relationship between the medium and its forms of memory and remembrance through a series of case studies of British and North American programmes and practices. These include ER , Grey's Anatomy , The Wire , Who Do You Think You Are? , and Life on Mars .

AMY HOLDSWORTH is a Lecturer in Film and Television Studies in the School of Culture and Creative Arts at the University of Glasgow, UK. She has published work in the Cinema Journal, Screen and the Journal of British Cinema and Television.

'Television, Memory and Nostalgia provides an insightful and highly evocative consideration of television's multiple relationships to memory, and is stimulating in both its range of examples and in the way that the book cuts a path through debates within television and memory studies. The book moves elegantly from a broad-based critical and theoretical reflection on television time and memory utilizing The Royle Family to brilliant effect - towards a series of chapters that examine memory texts, memorialized TV moments, and the material networks of television memory. These are all handled with considerable critical skill. Amy Holdsworth pulls off a sometimes rare quality in academic writing, producing a work that is, at once, intellectually stimulating and original, but also accessible and effortless to read.' - Paul Grainge, University of Nottingham, UK

'Television, Memory and Nostalgia is an exemplary work of interdisciplinary scholarship that will have a significant impact on its readers' thinking about the vexed relationships between our media and our memories. Holdsworth's investigation of television's contemporary "memory boom" draws together the theories and methodologies of television and memory studies in a manner that complicates the fundamental assumptions of both disciplines, dismantling the doxa that television fosters - and itself suffers from - a profound amnesia. Breaking with past treatments of this subject, Holdsworth focuses on the quotidian as opposed to the catastrophic, on popular as opposed to consecrated texts, and on memory's spatial dimensions as opposed to time. The originality of the book's approach extends to its presentation: sprinkled amidst its meticulous analyses of clip shows, season-ending montages, museum exhibitions, and discarded television hardware are deeply personal descriptions of Holdsworth's own televisual madeleines. These recollections beautifully capture the sensuousness of memory, and the sensuousness of television as well.'