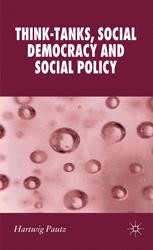 An analysis of think-tanks in Britain and Germany and their role in the re-making of the British Labour party and Germany's Social Democrats as 'Third Way' parties. The part that think-tanks played in the creation of the the 'workfare state' in the 1990s and 2000s is also explored in this book.

HARTWIG PAUTZ has published widely on the relationship between politics, policy and expertise. His writing has also been concerned with Social Democracy in Britain and Germany, and he is a commentator on issues surrounding German national identity.

'With this insightful and compelling study Hartwig Pautz provides a sophisticated analysis of the contribution think-tanks have made to the politics and policies of Germany and the UK between 1992 and 2005. An illuminating read which will be enjoyed by scholars and practitioners alike.'

- Ruth Wittlinger, Senior Lecturer in the School of Government and International Affairs, University of Durham, UK

'This book provides an incisive analysis of the respective contributions made by British and German think-tanks to the creation of key elements of social policy by the Labour Party and the SPD. Based on extensive empirical research, Dr. Pautz's work makes a significant contribution to our understanding of the British and German polities, and, specifically, enhances our grasp of the role played by think tanks in the policy process.'

- Robert Pyper, Head of School of Social Sciences, University of the West of Scotland, UK

'A worthwhile and enjoyable read for scholars and practitioners who would understand the way we live now.' - Derek Hawes