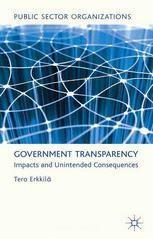 Transparency has become a global concept of responsible government. This book argues that the transnational discourse of transparency promotes potentially contradictory policy ideas that can lead to unintended consequences. It critically examines whether or not increased transparency really leads to increased democratic accountability.

TERO ERKKILÄ is Lecturer in Political Science at the Department of Political and Economic Studies, University of Helsinki, Finland.

In this analytically powerful study, Tero Erkkilä deftly traces the rise of calls for government transparency and information flows in the Nordic countries. His compelling explanations offer novel insights into the nexus of knowledge and governance. Most highly recommended.

'This important book is compulsory reading for anyone interested in issues of trust and accountability in public administration, or simply concerned about the future of democracy.'N

Public management and performance management reform have had a deep impact on public administration. One of the ironies of such reform, as Tero Erkkilä shows in this intriguing study, is that it jeopardizes access to public documents and government transparency. Erkkilä argues that Finland has experienced a shift from a welfare state to a competitive state and that this development has included a commodification of publically held information and access to such information. The strength of his study is the combination of detailed analysis without losing sight of the big questions.