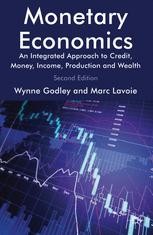 An Integrated Approach to Credit, Money, Income, Production and Wealth

This book challenges the mainstream paradigm, based on the inter-temporal optimisation of welfare by individual agents. It introduces a methodology for studying how institutions create flows of income, expenditure and production together with stocks of assets and liabilities, thereby determining how whole economies evolve through time.

WYNNE GODLEY was Director of the Department of Applied Economics at the University of Cambridge, UK, from 1970 to 1987, and a Professor of Applied Economics from 1980 to 1993. Subsequently, he was a Distinguished Scholar at the Levy Economics Institute of Bard College, New York, USA, and then a Visiting Research Associate at the Cambridge Endowment for Research in Finance.

'The framework that Godley and Lavoie develop, with a consistent numerical and simulational handle on the various models, is a return to a majestic Wicksellian tradition A whole generation of graduate students have been brought up on policy nihilism, bordering on paralysis in the face of policy dilemmas. A new generation, armed with the tools, concepts and models developed by Godley and Lavoie, can now return to the grand traditions of macroeconomics as an experimental science, focusing on policy.' - K. Vela Velupillai, Fellow, Girton College, Cambridge, UK, and Professor of Economics, University of Trento, Italy

'Wynne Godley has been the moving force behind keeping quantitative non-mainstream macroeconomics alive and flourishing for the last several decades...His work is inspiring, and will guide policy-oriented macroeconomic modellers for decades to come.' - Lance Taylor, Cambridge Journal of Economics

'...[This] clearly deserves to become a standard reference for everybody interested in SFC modelling in particular and modern macroeconomics in general. There are already first signs that other economists are indeed inspired by this way of thinking about the economy...' - Till van Treeck, Intervention, European Journal of Economics and Economic Policies