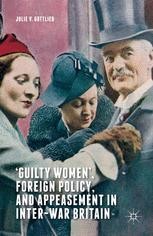 British women were deeply invested in foreign policy between the wars. This study casts new light on the turn to international affairs in feminist politics, the gendered representation and experience of the Munich Crisis, and the profound impression made by female public opinion on PM Neville Chamberlain in his negotiations with the dictators.

Julie V. Gottlieb is Senior Lecturer in History at the University of Sheffield, UK. She has published widely on the relationship between gender and political history. She is the author of Feminine Fascism: Women in Britain's Fascist Movement, 1923-1945 (2000), and has co-edited The Culture of Fascism (2004), Making Reputations (2005), and The Aftermath of Suffrage (2013).

“This is a valuable addition to the literature on women’s involvement in foreign affairs. A focus on gender encourages the reader to look at appeasement differently, while the author’s attempt to dig below the rhetoric of politicians and newspapers and to seek to uncover the perspectives of rank and file women is to be welcomed, and should provide an incentive for further research in this area.” (June Hannam, Twentieth Century British History, Vol. 28 (2), March, 2017)

“This book provides an enormous amount of information on British women’s interest in foreign affairs in the 1930s … . Readers interested in British women in the political arena will find plenty to draw upon here.” (Robert Boyce, Cercles, cercles.com, November, 2016)

“Julie Gottlieb has done the scholarly community an enormous service by providing the first gendered history of British foreign policy in the age of appeasement. … Guilty Women undoubtedly provides a much-needed and long-overdue corrective to the tendency within the existing literature to position women on the periphery … . This is a work of admirable scholarship and ambition, and the ever-expanding canon of appeasement literature is richer for the contributions it makes.” (Professor Daniel Hucker, Reviews in History, history.ac.uk, July, 2016)

“Julie Gottlieb’s impressive study is a wonderful example of their complementarity and, in her skilful hands, their combination profoundly recasts the familiar story of the ‘Munich Crisis’ of 1938. … Bringing gender and women’s history together, Julie Gottlieb has thus provided us with an immensely rich and rewarding analysis of appeasement. … this work of stunning craftswomanship and path-breaking scholarship.” (Marc Calvini Lefebvre, Revue Française de Civilisation Britannique, rfcb.revues.org, July, 2016)

"Julie Gottlieb has succeeded in finding a truly original angle on the study of appeasement. In highlighting the 'sex' dimension she shows that the language of foreign policy was heavily gendered. Her scholarly but highly readable book is bound to become a central point of reference in the field." - Richard Toye, University of Exeter, UK

"Julie Gottlieb has once again compelled a fresh understanding of a seemingly settled topic by injecting gender into the mix of elements to be analyzed and interpreted. 'Guilty Women', Foreign Policy, and Appeasement in Inter-War Britain opens up a new and invaluable way of thinking about appeasement and enables a broader and more complex appreciation of the period and its actors." - Susan Kingsley Kent, University of Colorado at Boulder, USA

"A scholarly yet highly readable analysis that breaks the mould of appeasement studies. This fascinating and important book opens up new vistas on 1930s Britain and on the study of foreign policy in general." - David Reynolds, University of Cambridge, UK