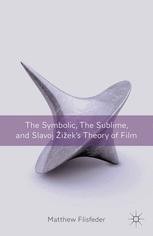 The Symbolic, the Sublime, and Slavoj Zizek's Theory of Film

Returning to questions about ideology and subjectivity, Flisfeder argues that Slavoj Žižek's theory of film aims to re-politicize film studies and film theory, bringing cinema into the fold of twenty-first century politics.

Matthew Flisfeder is Assistant Professor in the Department of Rhetoric, Writing, and Communications, at the University of Winnipeg, Canada. He is author of Postmodern Theory and Blade Runner (2017), and co-editor (with Louis-Paul Willis) of Žižek and Media Studies: A Reader (2014).

"This is a wonderfully lucid and perceptive account of how the i ekian approach to cinema provides the theoretical coordinates for our understanding of ideology. Via i ek, Matthew Flisfeder makes a compelling case for a Lacanian reading of film which, once freed from old debates on spectatorship, has a chance to strike a formidable alliance with Marxism to invite us to rethink our world through the eyes of film." - Fabio Vighi, reader in Film and Critical Theory, Cardiff University, UK

"Matthew Flisfeder's The Symbolic, The Sublime, and Slavoj i ek's Theory of Film marks a decisive moment in film studies. It is the first book to take full account of Slavoj i ek's significance for the analysis of film, and it does so in an exhaustive and insightful way. Though there now exist many recent books on Lacanian film theory and on Slavoj i ek's thought, no books exist that explain i ek's intervention in the domain of film studies. Not only does Flisfeder open new ground in this way, but he also creates a work that is accessible and theoretically sophisticated at the same time, much like i ek's own thought. It will provide a point of entry into the implications of i ek's philosophy on the analysis of cinema for all levels, from undergraduate students to professors of film studies. Flisfeder's book is a treasure for all." - Todd McGowan, associate professor of Film Studies, University of Vermont. USA

"[Flisfeder's] book insists on the need for a sophisticated and politically aware psychoanalytic film theory, and he makes an effort to answer the question about the relevance of Lacanian film theory today . . . This book may help to ignite an exciting new trend in film theory, and I welcome it." Canadian Journal of Communication