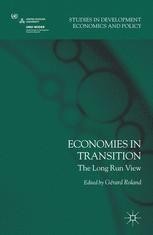 The twentieth anniversary of the fall of the Berlin Wall saw many reflect on the political, economic and social changes of recent years. The legacy of communism and the economic prospects of post-communist countries are rigorously analysed in this stimulating study of the long term consequences of transition.

'There were pleasant and unpleasant surprises in the transition process. It certainly did not occur in a vacuum and this volume, by some of the best experts on the subject, helps shed light on long-run trends in former socialist countries.' - Václav Havel, former President of Czechoslovakia (1989-1992) and President of the Czech Republic (1993-2003)

'This is an excellent volume on the transition process from central planning to a market economy. Reflecting the views of many of the most distinguished analysts, the book provides a mature perspective on one of the most important economic phenomena of the 20th and 21st century. It is a must read for anyone interested in understanding the transition.' - Jan Svejnar, Director of the International Policy Center at the Gerald R. Ford School of Public Policy, University of Michigan.