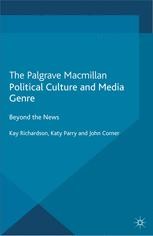 Exploring the forms and meanings of mediated politics beyond the news cycle, this book encompasses genres drawn from television, radio, the press and the internet, assessing their individual and collective contribution to contemporary political culture through textual analysis and thematic review.

Kay Richardson is Professor of Communication and Media at the University of Liverpool, UK, where she teaches courses on language and communication. Her research is located at the intersection of media studies, sociolinguistics and politics. She has authored or co-authored papers in these areas for Media, Culture and Society; Multilingua, Journal of Sociolinguistics; Journal of Language and Politics; Language and Literature; The British Journal of Politics and International Relations; and The European Journal of Cultural Studies. Her book, Television Dramatic Dialogue: A Sociolinguistic Study (2010) brought approaches from sociolinguistics to the study of performed, crafted speech in TV drama.

Katy Parry is Lecturer in Media and Communication at the University of Leeds, UK, where she teaches visual communication, political communication and media and war. She is a co-author of Pockets of Resistance: British News Media, War and Theory in the 2003 Invasion of Iraq (with P. Robinson, P. Goddard, C. Murray and P.Taylor, 2010). She has authored and co-authored journal articles in Journal of Communication; Media, Culture and Society; Sociology Compass; The British Journal of Politics and International Relations; Media, War and Conflict and Television and New Media. She was Research Associate for the Media Genre and Political Culture project, on which this book is based and continues to publish on media visualization of war.

John Corner is Visiting Professor in Media and Communication at the University of Leeds, UK, and Emeritus Professor of the University of Liverpool, UK. He has written widely on media history, theory and forms in books and journals, including Television Form and Public Address (1995), The Art of Record: A Critical Introduction to Documentary (1996) and Critical Ideas in Television Studies (1999). He co-edited the collection Media and the Restyling of Politics (with D. Piels, 2003). His most recent book is Theorising Media: Power, Form and Subjectivity (2011).