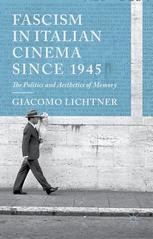 Fascism in Italian Cinema since 1945

The Politics and Aesthetics of Memory

From neorealism's resolve to Berlusconian revisionist melodramas, this book examines cinema's role in constructing memories of Fascist Italy. Italian cinema has both reflected and shaped popular perceptions of Fascism, reinforcing or challenging stereotypes, remembering selectively and silently forgetting the most shameful pages of Italy's history.

Giacomo Lichtner is Senior Lecturer in History and Film at Victoria University of Wellington, New Zealand. He is a cultural historian and his research focuses specifically on the relationship between history and film, cinema as both a mirror and creator of social trends and the political uses of cinema to create national and political identities. In addition to a number of articles and essays, he is author of Film and the Shoah in France and Italy (Vallentine Mitchell, 2008).

“A powerful and fluently written study of ‘the role that cinema has played in the evolution and transmission of Italy’s memories of … the long Second World War, which in Italy surely began with the Fascist takeover of power in 1922 and ended on 25 April 1945’ … . a lively and memorable work, and its disparaging and authoritative take on cinema, audiences, and the Italian memory of Fascism is likely to become a standard account.” (Alan O’Leary, H-Italy, H-Net Reviews, h-net.org, October, 2016)

'In his new book, Lichtner provides trenchant analysis of the cinematic portrayal of Mussolini's corrupting and violent dictatorship. Time and again he brilliantly illuminates the construction and misconstruction, representation and misrepresentation of a past that should not be permitted to fade away. Italy today needs its past and present read with Lichtner's sensibility and critical acumen.' - Professor Richard Bosworth, University of Oxford, UK

'Fascism in Postwar Cinema brims with considered reflections on the relationship of history, film, and memory, providing a clearly written and forcefully argued account of how film has engaged with Italy's Fascist past. Particular merits of the book are its attention to the often neglected 1950s and 1960s films, and to movies that register contemporary revisionist views of Fascism.'

'In this ambitious volume on Italy's failure to come to terms with its Fascist past, Giacomo Lichtner demonstrates the leading role that cinema has played in the nation's inability to remember the entirety of its wartime experience. This is no mere overview of portrayals of Fascism in film; it is a condemnation of misleading national stereotypes and the selective amnesia of film-makers, politicians and audiences since 1945. Under Lichtner's scrutiny, films are more than reflections of the sociopolitical context in which they were made; they become contributors to a narrative of national (mis)remembrance.' - Benita Blessing, University of Vienna, Austria