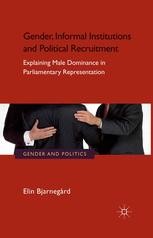 Parliaments around the world are still overwhelmingly populated by men, yet studies of male dominance are much rarer than are studies of female under-representation. In this book, men in politics are the subjects of a gendered analysis.

How do men manage to hold on to positions of power despite societal trends in the opposite direction? And why do men seek to cooperate mainly with other men? Elin Bjarnegård studies how male networks are maintained and expanded and seeks to improve our understanding of the rationale underlying male dominance in politics. The findings build on results both from statistical analyses of parliamentary composition worldwide and from extensive field work in Thailand. A new concept, homosocial capital, is coined and developed to help us understand the persistence of male political dominance.

'This fascinating new book broadens our horizons in a number of ways. It firstly challenges us to think about male dominance rather than female under-representation in politics, using a range of methods and data derived from detailed empirical research. Second it develops a concept of homosocial capital and uses it in novel ways to to give us significant new insights into the gendered impact of clientelism and informal institutions on candidate selection. This book is an important addition to the gender and politics scholarship and deserves to be widely read.' Georgina Waylen, Professor of Politics, University of Manchester, UK

'Quite simply, this is a brilliant book. Bjarnegård flips the script on the typical study of gender inequality in politics. Rather than focusing on women's underrepresentation, she draws your attention to men's dominance. Instead of returning once again to the enabling forces of democracy, she illuminates the barriers created by clientelism and corruption. The combination of global quantitative analysis and in-depth coverage of the Thai case is compelling. This is a must-read book for anyone who cares about persistent inequalities in electoral politics.' Melanie Hughes, Associate Professor, Department of Sociology, University of Pittsburgh, USA

'Throwing fresh light on the age-old puzzle of male dominance in elected office, this book provide a new theoretical framework by developing the concept of homosocial capital, often known as 'old boys networks', which are particularly useful for men seeking to get ahead in countries with clientelistic politics. The clear, informative and illuminating study gives new insights into the challenges which need to be overcome to achieve gender equality in elected office.' Pippa Norris, McGuire Lecturer in Comparative Politics, Harvard Kennedy School, Harvard University, USA

'The relation between gender equality, corruption and clientelism in democratic governance is as important as it is fascinating. In this theoretically sophisticated and empirically impressive work, Elin Bjarnegård presents a novel understanding not only for why male dominance in democratic politics can be reproduced through clientelistic network, but also how the specific mechanisms between informal power and democratic representation operate.' Bo Rothstein, August Röhss Chair in Political Science, Göteborg University, Sweden