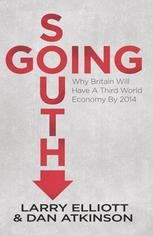 Why Britain will have a Third World Economy by 2014

With a second recession looming, Britain is facing a moment of truth. This book examines how the leader of the industrial revolution came to exhibit the features of a 'developing country'; chronic debt, volatile growth and vulnerability to external events. Going South explains how this has happened, arguing that the time for quick fixes is over.

LARRY ELLIOTT is the Economics Editor of The Guardian. He is the council member of the Overseas Development Institute and visiting fellow at the University of Hertfordshire, UK.

DAN ATKINSON is the Economics Editor of The Mail on Sunday, previous to this he was a financial correspondent at The Guardian.

Larry Elliott and Dan Atkinson are the authors of two previously successful publications The Gods That Failed and Fantasy Island.

'Elliott and Atkinson issued a prescient warning in Fantasy Island about the UK economy at a time when most commentators believed Gordon Brown's claim that he had abolished boom and bust. This book is another splendid polemic in the same mould, bursting with provocative ideas.' - Paul Ormerod, economist and author of Positive Linking and Why Most Things Fail'

'For over a century, Britain has been in denial about its decline. Unless it accepts the reality and gets its acts together soon, it may well join the South, that is, the developing world. That is the chilling message of this book, which you will start reading with incredulity but almost certainly close with the shocking realisation that it may well be right. Written with verve and edge, based on a profound understanding of Britain's history and full of insights about the economics, politics and popular culture of today's Britain, this book is an extremely powerful and sobering wake-up call for a nation that has lived off its past glory for too long.' - Ha-Joon Chang, Faculty of Economics, University of Cambridge, and the author of Bad Samaritans and 23 Things They Don't Tell You About Capitalism

'Atkinson and Elliott are savagely effective critics of the historic failure of Thatcher and Blair to check national decline in a world where our managerial and political elites do not know what to do about financial crisis. Their argument about how Britain is going south to developing country status is important because it counters wishful thinking about how we can become more Nordic and focuses the key questions about Britain's trajectory. This is what radical economic journalism should be about.' - Prof Karel Williams, CRESC, University of Manchester

'The redoubtable team of Elliott and Atkinson have done it again. Having predicted in their last book that the boom would end in tears, they now draw on their deep knowledge of Britain's economic history to warn of the danger of absolute, not relative, decline. Controversial - but disturbingly convincing. And a great read.' - William Keegan, The Observer

'Depressing and enlightening in equal measure. A compelling read from two journalists with a track-record of stripping bare the social and economic problems that Britain seems either unwilling or unable to tackle.' - Jeff Randall, Sky News business presenter