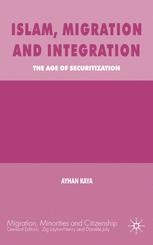 The Age of Securitization

This work explores contemporary debates on migration and integration, focussing on Euro-Muslims. It critically engages with republicanist and multiculaturalist policies of integration and claims that integration means more than cultural and linguistic assimilation of migrant communities.

'Kaya's work represents a useful contribution to the growing literature on the implications of the marginalization of Western Europe's perpetually growing Muslim communities. His emphasis on - and recommendations regarding - the centrality of the plight of younger, European-born Muslims to the evolution of the role of Islam on the continent in the future is one that should be taken seriously by governmental and Muslim communal leaders moving forward. It thus comes highly recommended.' - American Journal of Sociology

'Its fresh analysis of the landscape of European migration and its interdisciplinary appeal make Kaya's Islam, Migration and Integration a valuable resource for students of international migration and of Muslim disporas.' - Contemporary Sociology: A Journal of Reviews

'[The book is] informative for students and researchers in international relations as well as political science and a good handbook for general readers who are interested in European affairs, especially in Germany, France, Belgium and the Netherlands.' - Finnish Journal of Ethnicity and Migration

'This book brings a fresh perspective to the issue of the integration of Muslim communities in Europe by opening up the transnational space between the host and the sending countries. It is an approach that has the potential to reconfigure ethnic and religious associations into a positive resource for integration. The book can be strongly recommended to scholars in the social sciences who are working on issues around migration, minorities and integration in host society.' - Journal of Islamic Studies

'This book provides an in-depth analysis of how Islam is perceived internally by its followers and externally by western states, and how this has affected the integration of migration to any host population. It displays the dangers of what could emerge at a

'This book covers a lot of terrain...offering a solid...comparative and critical analysis of the salient discourses woven around Muslim identities.' - Mediterranean Politics