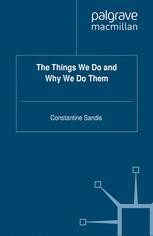 The Things We Do and Why We Do Them

The Things We Do and Why We Do Them argues against the common assumption that there is one thing called 'action' which all reason-giving explanations of action are geared towards. Sandis shows why all theories concerned with identifying the nature of our 'real' reasons for action fail from the outset.

Constantine Sandis is a lecturer in philosophy at Oxford Brookes University. He is the author of Davidson's Philosophy of Action (Continuum, forthcoming) and is currently editing a collection of essays on action explanation, forthcoming with Palgrave Macmillan.

'Everybody who is interested in or works on action theory ought to read it with great care. ,,Sandis clearly has a remarkable grasp of how action explanations and notions related to action explanations are employed within a wide variety of fields I found Sandis' book to be both stimulating and useful I recommend The Things We Do and Why We Do Them to both people engaged in empirical research on human behavior, and to action theorists trying to develop a better and more adequate theoretical account of human action.' - Carsten Fogh Nielsen, Metapsychology

'Sandis' dense, rich and subtle book succeeds in highlighting the complexity of human action and the corresponding diversity of its explanations...The book provides an important counterweight to the-ories claiming to reveal the "true" nature of human action and a helpful corrective to some of the most entrenched debates in the philosophy of action.' - Kristina Musholt, London School of Economics, Times Higher Education

'Constantine Sandis argues that contemporary philosophy of action is riddled with conflations. These include the conflation of an agent's behaviour and her actions with the movings of her body; the reasons for which an agent acts with the reasons why her actions occur; and what an agent is doing with her doing of it. Sandis's rich and penetrating book not only demonstrates how these various conflations undermine the conclusions philosophers argue for, but also provides philosophers of action with a much-needed road map for going forward. The Things We Do And Why We Do Them is a must read.' - Michael Smith, Princeton University, USA

'In this subtle book most of the leading contributors to the philosophy of action and those who study behaviour more generally - will find themselves chastised for committing one or more of the twenty conflations that are listed at the front. Constantine Sandis suggests that most of the entrenched debates in this area are really results of these conflations.'- Jonathan Dancy, The University of Texas at Austin, USA

'Overall...a valuable contribution to the philosophy of action.' -Markus Schlosser, University of Groningen, Philosophy in Review