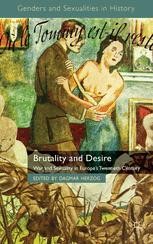 Tracing sexual violence in Europe's twentieth century from the Armenian genocide to Auschwitz and Algeria to Bosnia, this pathbreaking volume expands military history to include the realm of sexuality. Examining both stories of consensual romance and of intimate brutality, it also contributes significant new insights to the history of sexuality.

'Many myths have been produced about sexual pleasures and sexual terror in war and genocide. Dagmar Herzog's outstanding, disturbing, and ultimately fascinating anthology is the first to seriously historicize this most sensitive topic. Sexual desire was enmeshed in brutal violence all over Europe's most destructive century, but it was so in surprisingly diverse ways. A pathbreaking reference book and a must-read for each student of military history, gender history, and Holocaust and genocide studies.'

'This wonderful book makes a powerful contribution to the history of Europe in the 20th century. With their complex and comparative treatment of wars from the Armenian genocide, to the Holocaust, colonization and decolonization, and the recent conflict in the Balkans these collected essays carefully historicize the meanings and modalities of sexualized violence and sexual desire. Together they brilliantly demonstrate the intimate and integral ties between the history of sexuality and the history of European war.'

'Scholars and instructors from a broad range of disciplines (European history, military history, gender studies, imperialism, racism) will be grateful for this path-breaking collection of essays that analyze the complex intersections of sexuality and war from the Armenian genocide to the Balkan Wars of the 1990s. By focusing not only on sexual violence but also on desire and the consensual sexuality made possible by the dislocation and anonymity of war, the authors of this fine book also provide an important history of both female and male sexuality during Europe's bloody century.'

'Astonishing and unforgettable, this book is one of a kind. Its explorations into the taboo territory of sex and war span the 20th century, from Anatolia to Ethiopia, Auschwitz, Algeria, Bosnia-Herzegovina, and points between and beyond. These chapters are as remarkable for the deep particularity they exhibit in each case as for the powerful and urgently universal nature of the viciousness, pain, exhilaration, and desire they reveal. Dagmar Herzog has assembled a compelling, indeed, indisputable case for the inseparability of war and sex, in all their manifestations.'

'This history of sexuality risks a great deal. It confronts the issue of sexual violence against women, against men, and against children. It also takes on desire and love or, in any case, consensual relationships in times of war. The book succeeds and may serve as a model for further explorations because it is based on remarkably thorough research and on prudence as well as good judgment in making sense of sexuality in times of war.'