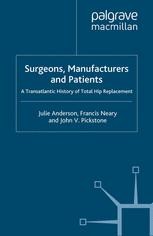 The Total Hip Replacement was invented by British surgeons after World War Two. It became the basis of a multi-billion global industry in joint replacement. This pioneering study ranges from inventive surgeons to multi-national manufacturers and explores total hip replacement in the very different health economies of the UK and the US.

JULIE ANDERSON is a Research Associate in the Wellcome Unit and the Centre for the History of Science, Technology and Medicine (CHSTM), in the University of Manchester, UK. She is completing a book on rehabilitation in the Second World War, and researching the history of blindness and other disabilities.

FRANCIS NEARY is a Research Associate in CHSTM. His (Lancaster) PhD was on mind-body relations in Victorian Britain. He works on material cultures and recently curated three exhibitions on the past, present and future of hip replacement.

JOHN V. PICKSTONE founded CHSTM and Wellcome Unit. His present research is on recent medicine, especially cancer services, medical technology, and the NHS. He is the author of Ways of Knowing: a New History of Science, Technology and Medicine.

'John Charnley, a Lancashire surgeon pioneered the artificial hip in the early years of the NHS. Today it is a multibillion dollar business largely based in the USA. Tracing what happened in between, this book has much to say about the way we think about new health care technology, and how we came to think that way. Historians will read it with pleasure. Policy makers should read it with concern.' - Stuart Blume, University of Amsterdam

'This important, original and timely book deals in an exemplary way with a central, but neglected aspect of modern medicine - its material side. It is literally a history of materials, but also of designs, markets and patients, of surgeons, engineers and entrepreneurs. It helps open a new agenda, showing that the history of medicine and industry is much wider than just pharmaceuticals.' - Thomas Schlich, McGill University, Montreal

'Elegant, informative and thought-provoking. The authors show how THR (standing in here for all bodily replacements) has influenced and been influenced by changing cultural, socioeconomic and political concepts about mechanization of the body, the industrialization of medicine, the public role of the medical profession, and both the privatization and globalization of the medical economy.' - Rosemary Stevens, Weill Cornell Medical College, NY

'Enriched by the new historiography of technology, this is a well-written piece of modern medical history.' - Christopher Lawrence, Medical History