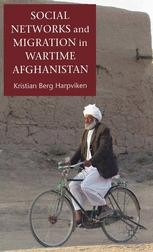 Drawing on fieldwork in the Herat area, Afghanistan, this book addresses migration patterns throughout three decades of war. It launches a framework for understanding the role of social networks for people's responses to war and disaster as well as mobilizing or maintaining material resources for security and gathering information.

KRISTIAN BERG HARPVIKEN is the director at the International Peace Research Institute, Oslo (PRIO), Norway. He has been leading the Working Group on the Transnational and International Facets of Civil War within PRIO's Centre for the Study of Civil War (CSCW). A sociologist, Harpviken focuses on methodology and on the dynamics of peace and conflict.

'In this systematic analysis of wartime migration, Kristian Berg Harpviken shows how the evolving structure of social networks shapes the decisions of ordinary people to leave their homes and to return. Drawing on extraordinary research in two Afghan villages, this compelling work should be read by scholars and policy-makers alike.' - Elisabeth Jean Wood, Yale University and the Santa Fe Institute, USA

'Kristian Berg Harpviken is among the few scholars to have met the empirical and conceptual challenges of analysing networks in conflict settings, as is amply shown in this timely and finely researched book on war and the Afghan diaspora.' - Nicholas Van Hear, The Centre on Migration, Policy and Society (COMPAS), University of Oxford, UK

'In a field saturated with macro level studies of war and peacebuilding in Afghanistan, Harpviken's stands out for giving agency to people. Afghanistan's refugees, both in exile and after return, present a compelling case for theoretical contributions to social networks, migration studies and political mobilization during wars. Few authors can claim as much experience with field work during the Taliban regime. Harpviken's first hand knowledge makes a strong case for how networks are formed and evolve in the absence of a state, for better and for worse.' - Shahrbanou Tadjbakhsh, Sciences Po, Paris, France

'Kristian Berg Harpviken's study of the decisions that Afghan villagers make about migration during wartime is an impressive scholarly achievement. It is substantively important (dealing with crucial matters of war and peace) and draws upon and contributes to important theoretical debates, most prominently in social-network theory. The threefold mix of on-the-ground empirical research with theoretical engagement and policy importance makes this a particularly strong contribution.' - Matthew Evangelista, Department of Government, Cornell University, USA

'This book provides a fascinating insight into war, displacement and return in Afghanistan, drawing on detailed empirical investigation during the period of Taliban control, and since the arrival of US-led coalition forces. Its insight into how social networks are maintained and even strengthened during conflict to channel migration and return is both striking and compelling. As a major study of the world's largest refugee displacement of modern times, it should be required reading for anyone interested in refugee movements.' - Richard Black, Sussex Centre for Migration Research, University of Sussex, UK

'Network theory has so far only been superficially referred to by students of civil war. Therefore it is all that more fortunate that Harpviken's impressive new book Social Networks and Migration in Wartime Afghanistan offers a systematic and innovative analysis of war-time social networks that breaks new theoretical ground on which future scholars of political violence and migration will be able to build whether they focus on Afghanistan or other conflicts. Firmly located in an explicitly sociological research tradition, his book constitutes an important counterweight to the increasing dominance of large-N studies testing various theories of political economy.' - Lars-Erik Cederman, Swiss Federal Institute of Technology Zurich (ETH), Switzerland