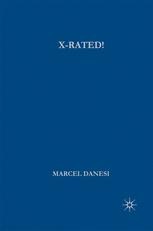 The Power of Mythic Symbolism in Popular Culture

Many attack pop culture as a crude 'sexual' and 'celebrity-based' culture that is purportedly bringing about the end of moral values. Renowned semiotician Marcel Danesi adds his signature insight to the debate by delving deep into pop culture through a consideration of symbols. Danesi's treatment of letters, such as the X in 'X-Rated,' the 'i' in 'iPod,' and other such symbols, reveals an ancient mythic structure that blends the sacred and profane dimensions of human psychic life. Danesi takes the reader on a remarkable exploration of the radical turns in American society, a society in which the search for pleasure and sexual expression often reign supreme. X-Rated! is a fascinating trip through what gives pop culture its secret appeal.

Marcel Danesi is Director of the Program in Semiotics and Communication Theory and Professor of Linguistic Anthropology at the University of Toronto, Canada. He is the author of many books, including Of Cigarettes, High Heels, and Other Interesting Things; X-Rated! The Power of Mythic Symbolism in Popular Culture; and The History of the Kiss: The Birth of Popular Culture. He was made a Fellow of the Royal Society of Canada in 1998, founded a research center (Center for Communication and Information Sciences), and is the Editor in Chief of Semiotica. Danesi's work has been featured in the New York Times, Toronto Star, and Psychology Today, among other print publications, and he has been a guest on broadcast outlets such as National Public Radio.

"Danesi is a giant in the semiotics of popular culture and has completely reinvigorated a field that has seen too many faux analyses of pop music, cult TV, and fan texts. Through the analyses of the feminine, the sacred and the profane, and the contemporary i-world, to the ubiquitous irrationality of the occult, X-Rated! repeatedly refreshes the parts that other textbooks don't even reach." - Paul Cobley, Reader in Communications, London Metropolitan University

"Marcel Danesi is one very hip and very cool scholar. His book does a superb job of explaining and applying ideas from the most important cultural theorists and media scholars to pop culture in an accessible, instructive, and highly entertaining manner. Offering brilliant insights into everything from Deep Throat to postmodernism, from 'V' power to X-rated films, from the sacred and the profane to Satanism, the book is required reading for anyone interested in pop culture, media criticism, and cultural studies." - Arthur Asa Berger, Professor Emeritus, Broadcast& Electronic Communication Arts, San Francisco State University

"A delightful romp through the turning points of popular cultrue and the enduring symbols that still inform it, often with roots in Greek and Roman mythology, the Bible and the occult." - The Toronto Star