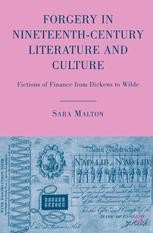 Forgery in Nineteenth-Century Literature and Culture

Fictions of Finance from Dickens to Wilde

Malton examines the literary and cultural representation of the financial crime of forgery from the time of massive executions of forgers during the early nineteenth century to the forger's emergence as the ultimate criminal aesthete at the fin-de-siècle.

"Forgery in Nineteenth-Century Literature and Culture offers a fascinating, wide-ranging account of Victorian preoccupations with forgery. In the surprising persistence of that concern Malton discovers the rich figurative power of forgery, within which worries over the integrity of money and finance could be extended to virtually any system of value, including personal identity. Fictions of finance thus include a remarkable array of Victorian novels, and Malton s treatment of those works offers new evidence of the power of fiction to articulate the deepest concerns of social life." - James Eli Adams, Cornell University, author of A History of Victorian Literature

"This carefully researched study provides the first extended analysis of criminal forgery in Victorian literature. While others have examined forgery as a metaphor for fraudulent literary commerce, Malton shows how the crime of forgery haunts the plots of Victorian novels. By examining the interplay between a changing legal regime and the fictional representations it provoked and responded to, Malton makes an important contribution to research in law and literature." - Simon Stern, Faculty of Law & Department of English, University of Toronto

"Malton has written a provocative, thoughtful, and engaging book that makes a solid case for giving forgery its due critical respect. Focusing on the metaphorical elements of her topic, her approach offers vivid, resonant readings of novels by Gaskell, Dickens, Trollope, Hardy, Wilde, and Arthur Conan Doyle. Malton's book contributes meaningfully to the growing canon of Victorian financial criticism and has made this reader eager to know still more." - Rebecca Stern, University of South Carolina, Victorian Studies (Volume 52, Number 1)