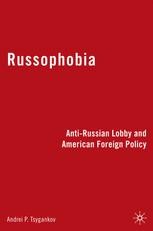 The book suggests that the US-Russia post-9/11 partnership did not endure because much of America's policy is shaped by an ambition to remain the world's only superpower. The book analyzes the negative role played by Russophobia and advocates a different approach to Russia in the post-Cold War world.

"The book s chapters deal with, among other topics, the Chechen wars, democracy promotion and energy policies. It is also important that this interpretation comes from a Russian-born political scientist who lives in the US and knows American discourse and politics well. Tsygankov s deep knowledge of both Russian affairs and camps and trends in US politics adds considerable value to this analysis. . . . this dense description of, and spirited attack on, Western rhetoric and policies regarding Russia will be a valuable addition and original contribution to seminars in such fields as international security, post-Soviet affairs and US foreign policy." - Europe-Asia Studies

"Although many works about anti-Americanism in Russia existed already, until now there was a lack of an approach that focused on Russophobia from an American perspective. . . Tsygankov s [book] provides the missing piece. . . This type of analysis opens the door for more comparative analysis of different "phobias" in international relations - Sinophobia, Islamophobia, Europhobia, etc. - and the tone of this book certainly inspires the further research of them that we would all benefit from." - Critique internationale

"In this stimulating and insightful book, Andrei Tsygankov shows how fear and loathing of Russia s political system as fundamentally incompatible with the interests and values of the West have distorted American popular perceptions of Russia and misguided U.S. policies toward the former Soviet Union. Arguing for a reorientation of U.S. attitudes and policies, Tsygankov calls for engagement, reciprocity, and patience as the keys to improving relations with an enormous, resource-rich, and strategically important country." - David S. Foglesong, Associate Professor of History at Rutgers, The State University of New Jersey, and author of The American Mission and the "Evil Empire"

"Andrei Tsygankov is one of the most profound analysts of both the rational and the irrational aspects of the US-Russian relationship. His searching, provocative book is an indispensable contribution to scholarship and to the debate on US policy towards Russia." - Professor Anatol Lieven, King's College London