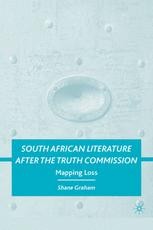 This book studies a broad and ambitious selection of contemporary South African literature, fiction, drama, poetry, and memoir to make sense of the ways in which these works 'remap' the intersections of memory, space/place, and the body, as they explore the legacy of apartheid.

SHANE GRAHAM is an Assistant Professor of English at Utah State University, USA and was formerly a Mellon Postdoctoral Research Fellow at the University of the Witwatersrand in Johannesburg, South Africa.

"Shane Graham's compelling new study brings a thematic order to the vast and generically diverse body of literature produced in post-apartheid South African. Generously inclusive and interdisciplinary, the study is nevertheless conceptually unified by an effort to understand the connection between bodies, places, and memory: a nexus that Graham teases out in a series of deft, lucid, and judicious readings. South African Literature After the Truth Commission is an unfailingly intelligent and readable book and will prove to be an indispensable scholarly resource." - Rita Barnard, Professor of English, University of Pennsylvania, author of Apartheid and Beyond: South African Writers and the Politics of Place

"It has often been remarked that following the political transition in South Africa, the country's literature took an inward turn. From a literature in which the need to bear witness was all-powerful, the emphasis began to fall on autobiography and confession, memory, and aesthetic and moral self-reflection. Shane Graham's account of post-apartheid literature complicates that picture: immensely well informed, his astute and lucid analyses show how the inward turn of the Truth and Reconciliation Commission has turned outward, leaving its mark on the public and social spaces of a fledgling and still struggling democracy." - David Attwell, Professor and Head of English, University of York, UK, author of Rewriting Modernity: Studies in Black South African Literary History