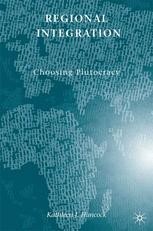 Hancock argues that there are three governance structures states can use when designing integration accords: plutocratic, supranational and intergovernmental. The first, in which states delegate to a wealthy state, has been largely ignored by scholars yet is both a logical choice and one that several states have chosen over the last 200 years.

KATHLEEN J. HANCOCK is an Assistant Professor of Political Science at the University of Texas, San Antonio, USA.

"Hancock's book makes a valuable contribution not only to the field of comparative regional integration but international relations more broadly. It extensively illustrates the empirical significance of plutocracy - rule by the dominant wealthy state - as a consensual form of regional integration, alongside the traditional intergovernmental and supranational models, and convincingly explains when and why plutocracy emerges as the most desirable form of transnational governance." - Walter Mattli, Professor of International Political Economy, Oxford University

"Challenging the conventional wisdom that intergovernmentalism and supranationalism are the only mechanisms for regional integration, Hancock advances and finds significant evidence for the importance of plutocratic structures. Hancock both uncovers and explains a heretofore unrecognized form of global governance." - David A. Lake, Department of Political Science, University of California, San Diego

"In this fascinating book, Hancock shows how the term plutocracy is appropriate for understanding Russia's foreign relations with the former Soviet republics. With strong chapters on the 19th century Prussian Zollverein and South Africa's long-standing customs union, Regional Integration is sharply theoretical, richly comparative, and highly relevant for understanding the prospects for cooperation in other regions, including Asia and the Americas." - Stephan Haggard, Krause Professor, Graduate School of International Relations and Pacific Studies, University of California, San Diego

"This book is well written, cogently argued, and will certainly contribute to our knowledge about institutional design, international economic integration, and comparative political economy. - Michael J. Tierney, Hylton Associate Professor of Government and International Relations, College of William and Mary