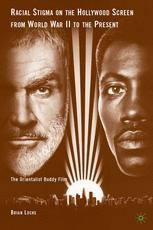 Racial Stigma on the Hollywood Screen from WWII to the Present charts how the dominant white and black binary of American racial discourse influences Hollywood s representation of the Asian. The Orientalist buddy film draws a scenario in which two buddies, one white and one black, transcend an initial hatred for one another by joining forces against a foreign Asian menace. Alongside an analysis of multiple genres of film, Brian Locke argues that this triangulated rendering of race ameliorates the longstanding historical contradiction between U.S. democratic ideals and white America s persistent domination over blacks.

"Locke grabs the reader with an intensity that is personal. This book will be easier for less experienced readers to digest than broader historical treatments. . .It is 100 percent solid, 0 percent sermonistic. Summing Up: Recommended. Lower- and upper-division undergraduates; general readers." - CHOICE

"Not merely an overview of anti-Asian portrayals in mainstream cinema, Locke cogently argues that Asian villainy in popular film enables a national fantasy, the disavowal of institutional discrimination via the spectacle of reconciliation between white and black. This book explodes the myth of progressive Hollywood by revealing the ways in which racial inclusion comes at a cost - in this case, to Asian Americans. Refreshingly accessible, Racial Stigma on the Hollywood Screen offers scholars, students, and general readers alike a sharp critical framework for understanding cross-racial representations in popular culture. Readers will no longer be able to view a mainstream buddy film with the same kind of racial innocence." - Leslie Bow, Professor of English and Asian American Studies, University of Wisconsin, Madison and author of Betrayal and Other Acts of Subversion: Feminism, Sexual Politics, Asian American Women's Literature

"Locke will change the way you see the Hollywood film. No longer will the buddy film be the space of male possibility, of the reconciliation between white and black. No: the Asian intrudes. The cost of unity in the dark is called out, particularly as the white buddy hands the Asian the bill for racism. Nothing doing, says Locke. He sets the record straight." - Vijay Prashad, author of Everybody Was Kung Fu Fighting: Afro-Asian Connections and the Myth of Cultural Purity.

"Too little has been said about Hollywood's mythic representation of interracial bonds, and even less about the complicated ways in which these ties bind some and exclude others. Locke's study of the interracial buddy film helps to redress this by engaging in a critical examination of how male bonds forged between African American and white characters conjure up the illusion of racial equity in America by vilifying Asians as ineluctably "foreign." Locke reads Hollywood films against the backdrop of changing attitudes toward race in America and skillfully links fiction with contemporary discourse involving the politics of American racism and xenophobia. He highlights the importance of the Asian presence in what is too often reduced to a black-and-white analysis of Hollywood's racial dynamic, and the result is a very welcome addition to a growing body of scholarly literature on the position of Asian Americans in commercial cinema." - Gina Marchetti, University of Hong Kong and author of Romance and the "Yellow Peril": Race, Sex and Discursive Strategies in Hollywood Fiction

"Locke's innovative model of the 'racial triangle' challenges the conventional wisdom that understands race in America in binary terms. Racial Stigma makes a valuable contribution to the field of comparative race studies by showing how Hollywood has often depicted black and white Americans transcending their mutual animosity by joining together against an Asian threat. This is a fresh, provocative argument that allows us to see popular cinema and American race relations in new ways." - Christina Klein, Boston College and author of Cold War Orientalism: Asia in the Middlebrow Imagination, 1945-1961

"Locke here offers an exploration of Orientalist buddy films and their nefarious subtext of racial reconciliation through the force of Asian threats. Unlike many who have simply lamented racial binaries, Locke explores their production of illicit thirds and more. His writing is extraordinarily clear and alive, his analysis full of nuance and skill, and his knowledge of film, cultural theory, and American history superbly erudite. The result is a brilliant contribution to the cultural study of cinema, critical race studies, and Asian American studies - a tour de force with a destined place among classics in the study of race and film in the American context." - Lewis R. Gordon, Laura H. Carnell Professor of Philosophy, Temple University