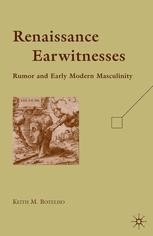 Renaissance Earwitnesses examines how maintaining masculinity on the early modern stage is intimately tied to 'earwitnessing,' or a sense of 'judicious listening' in his reading of plays by Marlowe, Shakespeare, Cary, and Jonson.

"Throughout this well-executed, carefully constructed, and witty book, [Botelho] examines a wide range of texts about rumor and related subjects like cautionary aural discernment. His accessible, detailed analyses of dramatic works are impressive." - Comparative Drama

"Keith Botelho intervenes in conversations about early modern conceptionsof speech and silence by shifting attention away from the oral and onto the aural. . .Botelho provides a new perspective on the transgressive potential of activesilence as a method of gaining information and cultural authority. He alsoeffectively highlights men s anxieties about their own bodily openness." - Renaissance Quarterly

"RenaissanceEarwitnesses, supported by close readings of plays by Marlowe,Shakespeare, and Jonson (as well as a brief discussion of Elizabeth Cary), offers some fresh insights into the ways that maletongues could threaten masculine authority and generate maleanxiety, as well as the ways dramatists could respond to rumorand the possibilities of controlling it." - Studies in English Literature

"Renaissance Earwitnessesis an important contribution to the growing scholarship on early modern drama s engagement with aural and acoustic traditions and practices.The book provides a valuable intervention in the scholarly debate about the early modern gendering of the dissemination and reception of information....In well-documented and lucidly written chapters on Marlowe, Shakespeare, and Jonson, and a brief concluding section on Elizabeth Cary, Botelho....enhances in significant ways our understanding of the role of gender in the authorization, production, and reception of information in early modern England." - The Journal of the Northern Renaissance

"[Renaissance Earwitnesses]raises several provocative questions that are sure to engage the interest of academics from various humanities-based disciplines [and] offers a unique take on sound studies by uniting the issues of hearing, perception, gender, power, and the transmission of information to challenge the notion of female gossip destabilizing male authority. . .Botelho's study is a fruitful and well-researched extension of the scholarship on acoustic environments and ephemera that has begun to grow in popularity in Shakespeare and early modern cultural studies. . . this book takes its place alongside important Shakespearean scholarship by elucidating how listeners, and discerners, were represented on the early modern English stage." - The Upstart Crow: A Shakespeare Journal

"Written in a style that makes for refreshingly easy reading, [Renaissance Earwitnesses] manages to mark a trail that readers will find worth following . . . there is little question of Keith Botelho's excellence as a scholar. Instances in the evidence he supplies and in his examination of individual plays indicate a scrupulous, perceptive, wide-ranging mind equipped to analyze both literary and non-literary materials." - Marlowe Society of America Newsletter

"Our own noisy and anxious world - blinging with cell phones, blaring with talk radio, cacophonous with the partial but potent pronouncements of spin-doctors - provides the ultimate context for Botelho s adventurous investigation of rumor in scripts by Marlowe, Shakespeare, Jonson, and Cary. Garrulous tongues and unguarded ears perform, in Botelho s hearing, important political and psychological work, particularly with respect to gender. The old cliché that women s tongues wag while men s eyes see the truth is given its quietus in this smart and reader-friendly book." - Bruce R. Smith, Professor of English, University of Southern California and author of The Acoustic World of Early Modern England and Shakespeare and Masculinity

"Renaissance Earwitnesses contributes fresh insights to the emerging field of early modern aurality studies. The strengths of the book lie in its compelling close-readings of plays by Marlowe, Jonson, Shakespeare, and Cary and its discussion of how these dramatists respond to cultural concerns about the reliability of information in an age when news is spreading faster than ever before." - Gina Bloom, Associate Professor of English, UC Davis and author of Voice in Motion: Staging Gender, Shaping Sound in Early Modern England

"Renaissance Earwitnesses is a welcome addition to the recent spate of workthatexamines how thesensory culture of the early modern era is reflected on theEnglish stage. While training his focus onearly moderndiscourses on the subject of rumour, Botelhointroduces a truly impressive collection of materials that have not yet figured in critical accounts of the sensory cultureof the period." - Wes Folkerth, Professor of English, McGill University and author of The Sound of Shakespeare