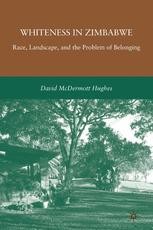 Race, Landscape, and the Problem of Belonging

European settler societies have a long history of establishing a sense of belonging and entitlement outside Europe, but Zimbabwe has proven to be the exception to the rule. Arriving in the 1890s, white settlers never comprised more than a tiny minority. Instead of grafting themselves onto local societies, they adopted a strategy of escape.

DAVID MCDERMOTT HUGHES is Associate Professor of Anthropology and Human Ecology and a member of the Graduate Faculty of Geography at Rutgers University, USA.

"Hughes ingeniously and persuasively weaves together ethnography, environmentalism, and aesthetics. His eloquent study of the white settler fetish for scenery has broad interdisciplinary ramifications for the future of race studies. At the same time, Hughes' book creates a major bridgehead between the environmental social sciences and the environmental humanities." - Rob Nixon, Rachel Carson Professor of English, University of Wisconsin and author of Dreambirds: The Natural History of a Fantasy

"It took a book this engaging to show us how linked the categories of race and space are. The entitlements and embodiments of white settlement shaped the history and hydrology of agriculture and development in Zimbabwe. In the end, Hughes tells us, the farms and fictions hewn from an imaginary wilderness were no more natural than the politics of exclusion that dominated twentieth and now twenty-first century Zimbabwe." - Luise White, Professor of History, University of Florida and author of The Assassination of Herbert Chitepo: Texts and Politics in Zimbabwe

"Whiteness in Zimbabwe is a powerful analysis of how, as the author puts it, 'environmental conservation and white identity have produced and shaped each other.' Through a careful and convincing analysis of both agricultural practices and forms of representation such as literature and photography, it lays bare the way that white settlers' romance with nature and landscape has been both a way of claiming mastery and belonging in an alien land, and a way of avoiding meaningful engagement with the majority black population. With implications that go far beyond Africa (not least, to the 'neo-Europes' of North America and Australia), this book is a major intervention into the vigorous current global debates on the politics of conservation." - James Ferguson, Professor of Anthropology, Stanford University and author of Global Shadows: Africa in the Neoliberal World Order