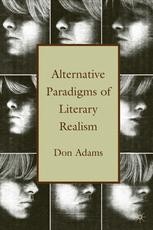 Using the traditional genres of allegory, pastoral, and parable, this book develops alternative paradigms of literary realism with which to reexamine a group of crucial but marginalized 20th century writers who have been misread as conventional mimetic realists.

DON ADAMS is an Associate Professor of English at Florida Atlantic University, USA and author of James Merrill's Poetic Quest.

"In his judicious study of five under-appreciated modern and contemporary American and British writers, Adams powerfully illuminates not only the individual writers he examines but also the nature of literary reality itself. Demonstrating how allegory, pastoral, and parable are used by modernist writers as an alternative to mimesis, Adams reveals as well the social and political contexts and consequences of such generic choices. Jane Bowles, James Purdy, Ronald Firbank, Henry Green, and Penelope Fitzgerald emerge from this refreshing and probing study as innovative, even revolutionary, writers." - Claude J. Summers, William E. Stirton Professor Emeritus in the Humanities, University of Michigan-Dearborn and General Editor, glbtq.com

"Adams shows how gender and genre are intertwined by establishing patterns of expectations for both human and literary behavior. In this exciting and persuasive study, he demonstrates how misunderstandings of genre blind readers to the complexities and delights before them. His work will lead us to widen our reading and our tastes and to appreciate works for the richness of their queerness and the depth of their frivolity. This is a triumph of scholarship and sensibility that finds in works often ignored and ridiculed both purpose and pleasure." - David Bergman, author of The Violet Hour: The Violet Quill and the Making of Gay Culture

"Arguing against the common confusion of realism with the mimetic, Adams offers an imaginative rethinking of subtly diverse genres within the mode of literary realism. His new readings provide fresh ways of thinking about the often misunderstood fiction of five underappreciated twentieth-century writers. This thought-provoking, stimulating study is illuminated by literary and intellectual surprises, broadly informed by the author's critical discussions of allegory, parable and the pastoral as well as intellectual history." - Andrew Vogel Ettin, Professor of English, Wake Forest University and author of Literature and the Pastoral

"In this inviting, perceptive, stimulating, and highly readable book, Adams leads us to a new appreciation of the under-read and under-valued authors: Jane Bowles, James Purdy, Ronald Firbank, Henry Green, and Penelope Fitzgerald. Unlike the great modernists Conrad, Eliot, and James, they refused to curtail and abort the old high forms of allegory, pastoral, parable to signal the pathos of loss in our vision, thoroughly incommensurable with our mimetic realism. Instead, they created alternative, blended atmospheres that allowed full play to the idealizing forms made commensurable somehow, with the life we live, all at once, in the aesthetic, ethical, and spiritual spheres. While registering the characteristic malaise of their age, these writers, so sensitively analyzed by Adams, subtly save us from being stuck in the sad clichés of transcendental homelessness we have settled for." - Naomi Lebowitz, Lewin Professor Emerita in the Humanities, Washington University in St. Louis

"The chapter on Penelope Fitzgerald is seminal and timely; it alone makes this book important . . . The scholarly community will benefit from having a serious study of authors whose work has been deemed unfashionable or even incomprehensible by the literary establishment." - Annette Gilson, Associate Professor of English, Oakland University