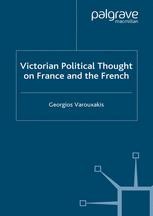 Victorian Political Thought on France and the French

By scrutinizing the major Victorian political thinkers' perceptions and representations of France this book shows how comparisons with the country on the other side of the Channel, its politics, civilization, and the French 'national character' contributed to nineteenth-century Britain's self-definition. While the utterances on France of several other figures are also examined, the main focus is on Walter Bagehot, John Stuart Mill, Matthew Arnold, Lord Acton, Thomas Carlyle, Nassau William Senior, James Fitzjames Stephen, William Rathbone Greg, Thomas Babington Macaulay, John Morley, and Frederic Harrison.

Georgios Varouxakis is Reader in the Department of History, Queen Mary, University of London, UK. He is the author of Mill on Nationality (Routledge, 2002) and the co-editor of Utilitarianism and Empire (Lexington Books, 2005) and of John Stuart Mill - Thought and Influence: The Saint of Rationalism (Routledge, 2010). He has also published many articles on various topics in the history of political thought and intellectual history (British and French) in the 19th and 20th centuries.

'This alert and stimulating study examines the ways in which ideas of France and Frenchness impacted on British political thought during the nineteenth century.' - Ceri Crossley, University of Birmingham, History of Political Thought

'This is a book of real interest and merit...' - J.P. Parry, Pembroke College, Cambridge, EHR

'[A] remarkably erudite and engaging study...Varouxakis demonstrates that he has absorbed the intellectual qualities of the men with whose minds he is so familiar - evenhandedness, empathy, intellectual curiosity and breadth, grasp of detail, subtlety of judgement, distanced irony...This book is an invaluable contribution to our understanding of the role of national comparison in political thought.' - Cécile Laborde, University College London

'A convincing and readable volume that will be invaluable for scholars and postgraduate students...Varouxakis does not slip into shallow, one-dimensional explanations...This present-day relevance lends further distinction to Varouxakis's capable presentation of the important role occupied by perceptions of France and the French in Victorian conceptions of Europe, nationalism and British identities.' - Pieter François, Royal Holloway College, University of London, Reviews in History, Institue of Historical Research, University of London

'...Varouxakis's is, I believe, a correct reading of Mill. One can hope that henceforward it will no longer be possible to misinterpret him so fundamentally either as an uncritical Francophile or as a carrier of creeping biologism. No-one has combed through Mill's collected works with anything like this degree of thoroughness or acuity.' - Peter Mandler, Cambridge University, Journal of Victorian Culture

'By moving the concept of 'national character' in Victorian thought centre-stage and by describing political thought as emerging from this starting point, he has probed deeply into the structures of political argument in Britain...With its clear exposition of argument and lucid language, Varouxakis' study meets the highest standards of intellectual history...A deepened understanding of the udnerlying concepts with which British political thinkers approached other countries...This book deserves the attention of readers with interests well beyond the thematic focus on France and the French.' - Detlev Mares, H-Albion

'A stimulating addition to the field...[A] scholarly, readable book which should be welcomed by those concerned with the political thought of the period...A valuable contribution.' - Duncan Kelly, University of Sheffield, Political Studies Review