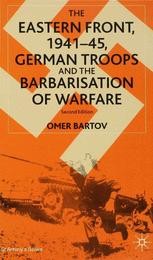 The Eastern Front, 1941–45, German Troops and the Barbarisation of Warfare

Based largely upon unpublished sources, Omer Bartov's study looks closely at the background of the German army on the Eastern Front during the Second World War. He describes the physical hardship, the discipline and morale at the front, and analyses the social, educational and political background of the junior officers who formed the backbone of the German army. Only with these factors in mind - together with the knowledge of the extent of National Socialist indoctrination - can we begin to explain the criminal activities of the German army in Russia and the extent of involvement of the army in the execution of Hitler's brutal policies.

'Omer Bartov's book is an extremely useful addition to the valuable Macmillan/St Antony's series of monographs on modern history and politics...Bartov is extremely good in recounting the nature and forms of, and responses to, the ideological instruction carried out in the armed forces during the war...' - John P. Fox, International Affairs Vol. 63 Nr 1 Winter 1986-87, pp. 123-4

'Omer Bartov's The Eastern Front...is...an original and flesh-creeping social history of German soldiers at the sharpest end of the Second World War which no serious student can afford to ignore.' - David Englander, British Book News

'The merit of Bartov's book is that he investigates the barbarisation process at grass-roots level by looking through the microscope at the activities of three front-line divisions on the eastern front. Using material from divisional files Bartov draws a vivid picture of the appalling conditions and heavy casualties which subjected ordinary soldiers to intolerable stress and strain turning them into brute beasts indifferent to human values.' - W.Carr, History, Autumn 1987, pp.554-5

'after Bartov's book, it will be even more difficult than before to argue that only a small minority of the German army was involved in the extermination policy in the East.' - Christian Streit Mannheim, German Historical Institute London Bulletin