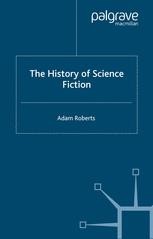 The History of Science Fiction

The History of Science Fiction traces the origin and development of science fiction from Ancient Greece up to the present day. The author is both an academic literary critic and acclaimed creative writer of the genre. Written in lively, accessible prose it is specifically designed to bridge the worlds of academic criticism and SF fandom.

'As a professor of 19th-century literature as well as a prolific science fiction writer, Roberts is eminently qualified to write a history of the genre. This impressive tome is ambitious in its scope, tracing SF's origins back to the fantastic voyages of the ancient Greek novel - the original Vernean voyages extraordinaires.' - The Guardian

'Adam Roberts' 'History' is the most significant history of the genre since The Trillion Year Spree by Brian Aldiss and David Wingrove, published nearly two decades ago, and demonstrates the most original thinking about science fiction since Kingsley Amis's New Maps of Hell more than forty years ago. This isn't merely an excellent historical survey but a narrative, showing compellingly how modern science fiction has roots in the fantastic-voyage tales of antiquity, and has been shaped by a dialectic between magic and materialism that dates back to the Reformation...Adam Roberts is already a proven author of high-quality science fiction. With 'History' he establishes himself as the most important critical voice in modern science fiction studies.' - Stephen Baxter, Current Vice President, The British Science Fiction Association and Author of Timelike Infinity and Voyage

'[A] refreshingly irreverent attempt to look at science fiction without blinkers.' - Strange Horizons

'The History of Science Fiction is a necessary and important book. It will get people talking, discussing and - dare I say it? - arguing about all manner of things relevant to science fiction, its history and its future.' - Green Man Review

'...the lasting impressions left by this History of Science Fiction are of the author's eye for detail, his understanding of the pervasiveness of the science fiction in contemporary culture, and his astonishing critical energy.' - Patrick Parrinder, The British Society for Literature and Science