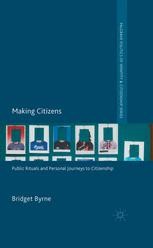 In an increasingly mobile world with mounting concerns about the states' control of borders and migration, passports and citizenship rights matter more than ever. This book asks what citizenship ceremonies can tell us about how citizenship is understood through empirical research in the UK, the USA, Canada, Australia, the Netherlands and Ireland.

Bridget Byrne is Senior Lecturer in Sociology at the University of Manchester, UK. She is the author of White Lives: The Interplay of 'Race', Class and Gender in Everyday Life, and her work has been published in journals including Citizenship Studies, Ethnic and Racial Studies, Sociology, Sociological Review and Feminist Theory. She is also a member of CoDE (Centre on the Dynamics of Ethnicity) at the University of Manchester.

“This book is based on qualitative data, including the observation of citizenship ceremonies in Australia, Canada, the United States, Ireland, the Netherlands, and the UK; interviews with officers in each of these sites; and in the UK with individuals who participate in these ceremonies to conclude their rites of passage to their new citizenship. … this book is a must for anyone interested in these highly relevant issues.” (Özlem Altan-Olcay, Ethnic and Racial Studies, March, 2016)

"This book offers a unique international study of citizenship ceremonies, comparing public rituals of 'national welcome' across six countries. Drawing on observations of ceremonies in six countries, as well as interviews with new citizens in Britain, Byrne offers a rich account that sheds light on the tensions, dissonances, and convergences surrounding the significance and experiences of citizenship. Byrne takes us from the pomp and circumstance of some large ceremonies or more modest and less formal ones, to the long, and at times difficult 'journeys' and experiences of those that she aptly refers to as 'citizands' (like graduands). She reveals how a nation's hospitality can be more uneven, fraught, and tenuous than the ceremonies suggest. This book gives readers a vivid picture of citizenship ceremonies as a rich social space and social event that Byrne consistently situates within wider historical and political contexts and debates over immigration. A must read for anyone interested in citizenship attribution and acquisition." - Anne-Marie Fortier, Lancaster University, UK