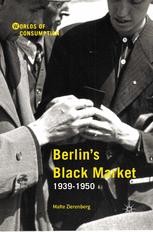 This book puts the illegal economy of the German capital during and after World War II into context and provides a new interpretation of Germany's postwar history. The black market, it argues, served as a reference point for the beginnings of the two new German states.

“This fascinating book responds to a strange paradox in the history of Germany after 1945. … Zierenberg’s book gives readers a rich cultural and social as well as economic history of Berlin’s black markets. … the publishers clearly made the right decision when they decided to have Zierenberg’s book translated into English … thus making it available to a wider audience of English-speaking readers. I think they will find this book as fascinating and thought provoking as I did.” (David F. Crew, Journal of Modern History, Vol. 89 (4), December, 2017)

“Central Europeanists with a focus on urban history, the history of everyday life, and the culture of consumption in Berlin during the first half of the twentieth century will read Malte Zierenberg’s recent monograph with keen interest and appreciation. … Berlin’s Black Market offers a fresh perspective on Berliners’ experiences through several transitional periods with an emphasis on the micro-level economy and the culture of consumption. The book’s sophisticated methodological approach is to be applauded.” (Matthew Berg, H-German, H-Net Reviews, h-net.org, November, 2016)

“This is a work of scholarly elegance and sprawling erudition. It offers a striking vision of a war-torn Berlin remarkably different from traditional histories, leading us through the corridors of Nazi power and then down winding neighborhoods and into cafes, restaurants, homes, and even brothels to the black markets that flourished under and after Nazi rule. Along the way, Malte Zierenberg, who is a remarkably surefooted guide through a most chaotic period, provides insightful explanations of the economic forces motivating illicit trade, draws attention to the new social relations that sprang up around it, and provides astute interpretations of the symbolic meanings Germans attached to their experiences of dictatorship, war, occupation, and national division.” (Jonathan Zatlin, Professor at Boston University, USA)

“This is a wonderful book. It presents an ethnography of Berlin’s black market from 1939 to 1950. It shows how a massive illicit trade in goods and services developed according to its own rules and rituals, which adjusted with agility and ingenuity to the changing political and economic circumstances of dictatorship, war, occupation, and the city’s division. In attending to the connotations that the black market acquired in the eyes of opponents as well as participants, the book offers as well a fascinating cultural analysis of daily life in the big city during these turbulent times.” (Roger Chickering, Professor Emeritus of History, Georgetown University, USA)