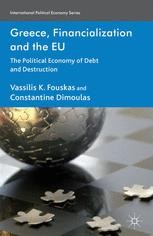 Greece, Financialization and the EU

The Political Economy of Debt and Destruction

The debt crisis in Greece has sparked lively debates about the origins of the crisis and policy measures to be adopted in order to fix it. The authors offer the first original and comprehensive narrative on Greece.

Vassilis K. Fouskas is Professor of International Politics and Economics at the Business School of the University of East London, England. He has published widely in the field of international economics and politics and his works have been translated into more than ten languages. He is the founding editor of the Journal of Balkan and Near Eastern Studies.

Constantine Dimoulas is Lecturer in Social Administration and Evaluation of Social Programs at the Department of Social Policy, Panteion University, Athens, Greece. He coordinates the research unit for health policy and social services, which is part of the Institute of Labour of the General Confederation of Greek Workers (INE-GSEE). He has published widely in the field of social policy and industrial relations.

'The authors have done a great job in terms of the focus of the book. But more importantly their emphasis on the Political Economy dimension of the 'Great Recession' as it has affected Greece in particular adds a great value to the book not always appreciated by the profession.' - Philip Arestis, University of Cambridge, UK

'The book, written from the perspective of long lines through history, opens a new point of view on the global and the European crisis. Intimate knowledge of Greece and its history is combined with a globalist view of the financialized world. It is the tension between the two, which allows many interesting and new insights. Although I am less pessimistic about Greece and even more pessimistic about the future of the Euro-zone than the authors, the book is thought-provoking and original and deserves a broad readership.' - Heiner Flassbeck, United Nations Conference on Trade and Development (UNCTAD), Switzerland

'This is a lucid, creative and insightful exposition of the Greek/Euro-zone crisis. Seen from the innovative theoretical perspective of 'global fault-lines' and the power-shift to Asia, the authors have produced a remarkable and thought-provoking theoretical and historical narrative, which is both a punchy polemic and an impressive gathering of empirical evidence. It is recommended reading for everybody wishing to come to terms with the global power-shift that is unfolding before our eyes.' - Bülent Gökay, Keele University, UK

'This is a fundamental book. It narrates the truth and the drama of the Greek people caused by unprecedented neo-liberal policies of austerity - the real social danger.' - Giulio Sapelli, University of Milan, Italy

Read an article by the authors on OpenDemocracy

"Fouskas and Dimoulas's account thus offers an intricate political economic analysis which moves away from the basic stereotypes populating both media and economic accounts of the Greek crisis... their account is powerful and enlightening." - Journal of Global Faultlines

"One of the best advocates of re-vamped, well-argued and smart Neo-Marxist accounts on Greece. It is a well-thought synthesis of economics, politics and international relations that attempts not only to theorise but apply the theoretical insights to the Greek situation." - The Cyprus Review

"An ambitious and thought-provoking account of the Greek financial crisis ... this book deserves a wide audience given its

provocative thesis and its attempt to move beyond purely economistic accounts to provide an integrated, holistic explanation of the current Greek crisis." - Perceptions

'Vassilis Fouskas and Constantine Dimoulas follow a different path in Greece, Financialization, and the EU. They take a more holistic, global approach to the crisis, placing it in historical perspective (which is sorely missing from academic dialogue) and analyzing it in interdisciplinary terms (the crisis has economic, geostrategic, and cultural roots). I salute the authors for attempting to do what most analysts either avoid or falsely prophesize. They correctly point out that Greece cannot overcome its problems by itself. It is a key argument that bears repeating.'- Nikolaos Zahariadis, Mediterranean Quarterly, (2014)

'This is an ambitious and thought provoking account of the Greek financial crisis what is novel in the present book is that it attempts to locate the current crisis in a broader historical and global context using the lenses of Marxian political economy.'- Ziya Öni?, Perceptions, Volume XIX, no.2, (2014)

'"It's a misunderstanding that Syriza has a hard line," said Vassilis Fouskas, a professor at the University of East London who has been with the party since its inception and identifies with Syriza's left. It has "a very moderate right-wing Keynesian program that wanted simply to alleviate some of the conditions that created havoc in Greece."' - Bloomberg Business, June 19 2015, http://www.bloomberg.com/news/articles/2015-06-19/compromise-is-a-dirty-word-for-tsipras-backers-in-aid-standoff