Literatures and Cultures of the Islamic World
Free Preview 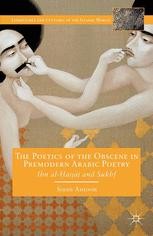 The Poetics of the Obscene in Premodern Arabic Poetry

The book is the first study of the 10th century Iraqi poet Ibn al-Hajjaj who popularized a new genre of obscene and scatological parody (sukhf) and is considered the most obscene poet in Arabic literature. Antoon traces the genealogy of this fascinating genre in and examines its rise by placing it in its sociopolitical context.

"Exciting and vital to the unearthing of new trajectories for the Arabic literary tradition . . . [Antoon's book] is a timely and uplifting work, which must be taken seriously and built upon." - Journal of the Society for Contemporary Thought and the Islamicate World

'Sinan Antoon is among the few scholars who in recent years have embarked on the unprejudiced study of what in Arabic is called muj?n or sukhf. It is not surprising that until recently in the West, and still in most Islamic countries, the study of obscenity and scatology was hampered by moral and religious scruples, aided by aesthetic prejudice. This makes the present study all the more welcome and important. Scholarly and thorough, it is also readable (if one can stomach the poems with their unstoppable outpouring of filth), written in an accessible style, neither marred by the excessive use of jargon nor suffering from being clothed in a straightjacket of Theory. The numerous translations of poems are reliable and accompanied by the Arabic text in transliteration.' - Geert Jan van Gelder, Laudian Professor of Arabic, University of Oxford, UK