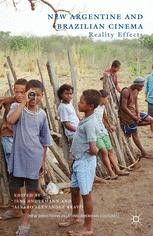 Reality Effects brings together the reflections of leading film scholars and critics from Latin America, the UK and the United States on the re-emergence of the real as a prime concern in contemporary Argentine and Brazilian film, and as a main reason for the acclaim both cinematographies have won among international audiences in recent years.

'This clearly organized collection of scholarly articles, destined to be a key work in its field, examines the reality effects discerned in to prominent recent film movements: the New Argentine Cinema and the Brazilian Retomada . . . The research for this volume proves wide-ranging and up-to-date, and insightful, innovative close readings of key films, such as Playing, are offered . . . Recommended.' Choice

'Essays in this important collection challenge the simplistic notion of the much heralded 'new Latin American cinema,' drawing our attention instead to the local conditions that govern recent films from Argentina and Brazil. New Argentine and Brazilian Cinema is an innovative contribution both to our understanding of reality effects in these regional cinemas and to our thinking about 'world cinema' more broadly.' - Andrea Noble, Durham University, UK

'Since Italian neo-realism, all new cinemas in the world have striven to approach and reveal reality. By assessing the new Argentine and Brazilian cinemas through their 'reality effects,' this book touches the political core of two thriving film production centres whose common language is truly universal.' - Lúcia Nagib, University of Leeds, UK

'This volume addresses key theoretical issues that have emerged with the dawn of the digital image by focusing on realism in contemporary Brazilian and Argentine cinema. The contributors consider the blurred and shifting boundaries between fiction and documentary in the specific context of two major Latin American cinema revivals that began in the 1990s. As a whole, the volume pushes forward critical debates around the concept of ´the real.´ It is thus indispensable reading for scholars and students of Latin American film and of film studies more generally.' - Lisa Shaw, University of Liverpool, UK