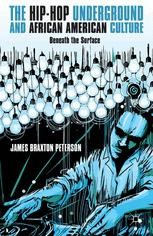 The underground is a multi-faceted concept in African American culture. Peterson uses Richard Wright, KRS-One, Thelonius Monk, and the tradition of the Underground Railroad to explore the manifestations and the attributes of the underground within the context of a more panoramic picture of African American expressivity within hip-hop.

James Braxton Peterson is an associate professor in the Department of English and the director of Africana Studies at Lehigh University.

“The Hip-Hop Underground is an exciting and important read that leaves, as any good text does, readers with many questions and a taste for further review of the pieces of culture that those of us in black communities remember, expunge, and hold forever dear.” (Andreana Clay, Journal of American History, Vol. 103, 2016)

"By applying the interpretive sensibility of hip-hop culture to some of the most significant questions in contemporary arts and letters, James Braxton Peterson challenges received wisdom and replaces it with a more sophisticated, more practical, and ultimately more honest picture of America, itself. The Hip-Hop Underground and African American Culture firmly establishes Peterson's place in the vanguard of modern cultural scholarship." - Joseph Schloss, author of Making Beats: The Art of Sample Based Hip-Hop

"This piece of scholarship by James Braxton Peterson provokes deep critical thought about Black culture, Black identity, Black authenticity and how these are navigated in public and private culture by interconnecting analyses of figurations of real cultural practices and experiences such as the Underground Railroad, underground hip-hop, vernacular speech, African American literature and art, and certain types of masking. Setting out analytical tools and drawing upon pioneering theorists such as H. L. Gates (signifying), H. Baker (vernacular theory), T. Rose (cultural encoding), W. Labov (variationist linguistics), N. Chomsky (deep structure), G. Smitherman (Black discourse), I. Perry (social construction of authenticity), and others, Peterson provides a guide to detecting sociolinguistic markers of social identity in print. He 'keeps it movin' by connecting DJ Premier's masked sampling, a form of signifying, to Frederick Douglass' signifying on those who would unmask the Underground Railroad; Harriet Tubman is connected to female emcee Dirty Harriet (Rah Digga), who follows in the lyrical murderer tradition of Zora Neal Hurston's Janie; while Paul Lawrence Dunbar's 'We Wear the Mask' is connected to Robin D. G. Kelley's reading of such and the Fugee's 'The Mask.' Peterson's analyses function as skillfully as a DJ, an emcee or a rhyme king, selecting, juxtaposing, and guiding the audience through appropriate themes, forms, and issues to move us to a deeper and more complex understanding and experience of the roots and alliances of the underground in African American, hip-hop, and human culture." - Elaine Richardson, Professor, The Ohio State University, USA, Founder, OSU Hiphop Literacies Conference, and author of Hiphop Literacies
Show all