Christianities of the World
Free Preview 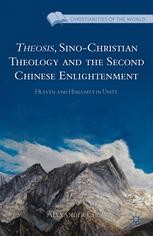 Heaven and Humanity in Unity

For a millennium and a half in China, Christianity has been perceived as a foreign religion for a foreign people. This volume investigates various historical attempts to articulate a Chinese Christianity, comparing the roles that Western and Latin forms of Christian theology have played with the potential role of Eastern Orthodox theology.

Alexander Chow is Chancellor’s Fellow at the School of Divinity, University of Edinburgh, UK.

“Book contains a great deal of information and insight, and deserves careful engagement by those who seek to ponder ways in which the Christian message can be expressed persuasively to Chinese. Dense, tightly organized, and well-written, the volume deserves an extended description and evaluation. … Chow has given us a treatise of significant worth. … a vigorous, even brilliant, attempt to construct a Sino-theology within the context of conversations with Christians and others from the Second Chinese Enlightenment … .” (G. Wright Doyle, Global China Center, globalchinacenter.org, April, 2015)

“The book is a most useful introduction to contextual theology in Mainland China in the twentieth and twenty-first centuries. … The book is to be recommended as a creative interpretation of Mainland Chinese contextual theology in the twentieth and twenty-first centuries. It would be a useful introduction to Mainland Chinese theology for non-Chinese undergraduate and graduate students.” (Thomas G. Oey, International Bulletin of Missionary Research, Vol. 39 (2), April, 2015)

“I would strongly recommend this book to anyone with an interest in the history and development of Christianity in China. Those with a general interest in Chinese cultural history will also find this a thought-provoking work.” (Carl Kilcourse, carlkilcourse.wordpress.com, August, 2014)

“Alexander Chow … analyzes some of the fundamental differences between the traditional Chinese worldview and that of historic Christianity. … This book is highly recommended for those who are involved or who contemplate ministry in the Far East. It contains an excellent summary of the theological thinking of several contemporary Chinese Christians and offers insightful ideas regarding contextualization that will be of use to ministers of the gospel whether or not they agree with Chow’s emphasis on Eastern Orthodoxy.” (Larry Poston, Missiology, Vol. 42 (3), July, 2014)

“Alexander Chow’s study of twentieth-century Chinese theology presents a remarkably stimulating and thought-provoking discussion. He not only shows how the absence of Orthodox theological thought in China has been to its great detriment, but offers a virtuoso constructive theology showing how it might be possible to reconceive a more Sino-centric theology out of Orthodox tenets.” (Chloë Starr, Studies in World Christianity, Vol. 19 (3), 2013)

'Can Christianity be accepted as the fourth wisdom tradition of China, alongside the three teachings of Confucianism, Daoism and Buddhism, in their mixed, shared, and pre-conditioned engagement? Is there a contextual theology which embraces at its core the Chinese principle of 'Heaven and Humanity in Unity' (Tian ren heyi)? Is there a way to interpret theological recourses in a non-Christian context? At once spirited and intellectual, and simultaneously critical and historical, this book offers an encouraging voyage into a great space that has been left unexplored for too long.' - Yang Huilin, Vice President and Professor of Comparative Literature and Religious Studies, Renmin University of China

'Most studies of Christianity in China have been undertaken by historians or social scientists rather than by theologians. Alexander Chow's book is different. He brings twentieth-century Chinese Christian leaders such as Watchman Nee, T.C. Chao, and K.H. Ting into dialogue, not simply with the Western theological tradition, but crucially also with the writings of the Eastern Fathers and the Orthodox tradition. The result is a strikingly original work that will attract lively debate. No serious student of Chinese Christianity will be able to ignore it.' - Brian Stanley, Professor of World Christianity, University of Edinburgh, UK'This monograph represents 'contextual' theology at its best: a deep investigation of some key concepts of salvation in the Chinese-Confucian culture vis-à-vis a critical and insightful assessment of Christian theological formulations in both lay and academic Chinese theologies. Alexander Chow gleans from the rich soteriological resources of the Christian East with its concept of theosis to propose a viable constructive theology of salvation for an Asian context. A must-read for both theologians and missiologists.' - Veli-Matti Kärkkäinen, Professor of Systematic Theology, Fuller Theological Seminary, Pasadena, CA, USA, and Docent of Ecumenics, University of Helsinki, Finland
Show all