Britain and the World
Free Preview 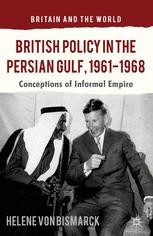 An in-depth analysis of Great Britain's policy in the oil-rich Persian Gulf region during the last years of British imperialism in the area, covering the period from the independence of Kuwait to the decision of the Wilson Government to withdraw from the Gulf.

Helene von Bismarck received her PhD in Modern History in 2011 from the Humboldt-University in Berlin, Germany. A former Lecturer of Western European History at Humboldt-University, she has published articles in Middle Eastern Studies and British Scholar, as well as an online op-ed column about Great Britain's international relations during the Twentieth Century.

"When set against the broader backdrop of decolonization during the 1960s, it is tempting to paint a broad-brush picture of gradual and inevitable retreat. By contrast, Helene von Bismarck's study shows that for much of the decade the British government and its representatives on the ground in the Gulf did not contemplate such a retreat. She argues that in the wake of the substantial military deployment in defense of Kuwait in the summer of 1961, a British government review concluded that vital British economic

"If the defense of British economic interests was at the heart of the continuing British commitment to the Gulf through the mid-1960s, the question might reasonably be asked, defense against whom? Von Bismarck concludes rightly that the main threat to the British position was perceived as coming from Arab nationalism, whether in the form of the Iraqi threat to Kuwait, or, more generally in the form of the advance of the influence of Egyptian President Gamal 'Abd al-Nasser." - Nigel J. Ashton, The Middle East Journal, Volume 67, Number 4, Autumn 2013, pp.659-660 (Article)

"This study fills an important gap in the existing literature by providing considerably greater detail about Britain's attempts to develop and defend its position in the Gulf during the 1960s. For von Bismarck, the story of the British role in the Gulf in the 1960s was principally one of the intensification of British imperialism, rather than its gradual disappearance." - Nigel J. Ashton, The Middle East Journal, Volume 67, Number 4, Autumn 2013, pp.659-66 (Article)

"Helene von Bismarck offers a subtle but much needed contribution to the study of Britain's long and complicated presence in the Persian Gulf Bismarck has contributed to a more nuanced understanding of the final days of the British empire; days marked not by the lurking inevitability of decolonization but rather by the more pressing matters of pursuing Britain's interests in ever-present and ever-shifting series of day-to-day crises and decisions." - Jonathan Kuiken, Journal of British Studies, Volume 53 / Issue 02 / April 2014, pp 528-529 (Article)

"Recent speculation about Britain's return 'East of Suez,' makes the publication of Helene von Bismarck's study of British policy towards the Persian Gulf in the 1960s particularly timely. Helene von Bismarck has succeeded in producing a well-researched and readable account of Britain's swansong in the Gulf." - Simon C. Smith, Diplomacy and Statecraft 25:1, pp 182-184 (Article)

"British Policy in the Persian Gulf is an excellent in-depth study of British policy-making. (...) Her chapter on Anglo-American cooperation is, perhaps, the book's most valuable contribution; (...) Scholars of the Persian Gulf, whether interested in Arab perspectives or those of the British Foreign Office, will find much of value in von Bismarck's work." - Kristi N. Barnwell, Journal of Arabian Studies, Vol. 4, No. 1, 2014, pp.152-153 (Article)

"By publishing this slice of British history, Bismarck's contribution will allow scholars of British imperial and foreign policy to consult it for reference instead of ploughing through the multitude of original documents themselves." - J.E. Peterson, Asian Affairs, Vol. 45, No. 2, June 2014, pp. 344-346 (Article)

"Despite the continuing refusal of the British Government to release all the documents relating to these events, she provides the fullest and most persuasive account yet offered of British involvement in the ousting first of Shaikh Saqr of Sharjah in 1965, and then of Shaikh Shakhbut of Abu Dhabi in 1966." - Spencer Mawby, American Historical Review, June 2014 (Article)

"Well-researched and [with] interesting details which help us build up a more complete picture of the latter stages of Britain's presence in the Gulf." - Saul Kelly, Middle Eastern Studies, March 2015 (Article)