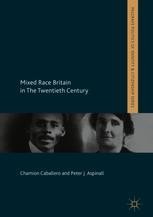 This book explores the overlooked history of racial mixing in Britain during the course of the twentieth century, a period in which there was considerable and influential public debate on the meanings and implications of intimately crossing racial boundaries.

Based on research that formed the foundations of the British television series Mixed Britannia, the authors draw on a range of firsthand accounts and archival material to compare ‘official’ accounts of racial mixing and mixedness with those told by mixed race people, couples and families themselves.

Mixed Race Britain in The Twentieth Century shows that alongside the more familiarly recognised experiences of social bigotry and racial prejudice there can also be glimpsed constant threads of tolerance, acceptance, inclusion and ‘ordinariness’. It presents a more complex and multifaceted history of mixed race Britain than is typically assumed, one that adds to the growing picture of the longstanding diversity and difference that is, and always has been, an ordinary and everyday feature of British life.

Chamion Caballero is Visiting Senior Fellow at the London School of Economics. She has published widely on issues of racial mixing and mixedness and along with Peter Aspinall and Bradley Lincoln is Co-Founder and Director of the Mix-d Museum, an online archive recording and sharing the history of racial mixing in Britain.

Peter J. Aspinall is Emeritus Reader at the University of Kent, UK. His publications include 75 papers on race and ethnicity and several books, including Mixed Race Identities (Palgrave Macmillan, 2013). He was ONS National Convenor for the ethnicity question in the ONS 2001 Census Development Programme.

“In Mixed Race Britain in the Twentieth Century, Chamion Caballero and Peter J. Aspinall critically investigate newly discovered archives, photographs, first-hand lived experiences and existing academic literature to present an unprecedentedly comprehensive history of racial mixing in Britain. … Overall, the book is an invaluable contribution to the study of the mixed race population in the British context.” (Ivana Chen, LSE Review of Books, July 24, 2019)
“Mixed Race Britain in The Twentieth Century is a fine example of incisive scholarship underpinned by detailed critical analysis of transformations in discourses of mixed race. Its examination of hidden or forgotten histories of mixed race avoids simplistic generalisations about either mixed race people or white British society. It brings the voices of ordinary people to public attention and, in doing so, situates them in history and illuminates the complex ways in which competing discourses are entangled in old and new racial projects. Its refusal to be drawn into telling a singular story--of a move from denigration to celebration--is intellectually exciting. This book is a must read for those in critical mixed-race studies and anyone interested in racialisation, gender, family life and social reproduction and change. There is no doubt that it will become a much-cited classic.”(Ann Phoenix, UCL Institute of Education, UK, and Helsinki University Collegium for Advanced Studies, Finland)

“Here at last is a book we have long needed: a scrupulously researched and highly readable account of twentieth century mixed-race Britain. Its range is extensive: charting the history of British racism and the slow shifts in attitudes towards and cultural representations of racial mixing, it also examines how interracial relationships have long been a part of wider communities and how ‘mixed race’ has finally become a positive identity. This informative, thoughtful and wise book is a landmark text.” (Lucy Bland, Anglia Ruskin University, Cambridge, UK)

“This important new book skilfully links both the distant and the more recent histories of mixing in Britain to ‘mixing’ in the here and now. With nuance and meticulous investigation, Chamion Caballero and Peter Aspinall have written a book which extends our understanding of the lives and experiences of mixed race people in Britain.” (Miri Song, University of Kent, UK)