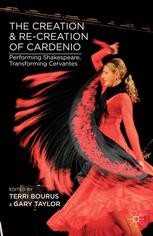 The Creation and Re-Creation of Cardenio

Did Shakespeare really join John Fletcher to write Cardenio, a lost play based on Don Quixote? With an emphasis on the importance of theatrical experiment, a script and photos from Gary Taylor's recent production, and essays by respected early modern scholars, this book will make a definitive statement about the collaborative nature of Cardenio.

"Taylor and Bourus's The Creation and Re-creation of Cardenio is a game-changer in Shakespeare studies. From now on, no one will be able to discuss the Shakespeare canon without reference to this book or the inclusion of Taylor's Cardenio." - David Black, award-winning novelist, television writer and producer, and Scholar-in-Residence, Kirkland House, Harvard University, USA

"Gary Taylor and Terri Bourus make Shakespeare come alive with such enthusiasm, you'd swear the Bard himself was sitting in the room with them. Meticulous and passionate scholars, they don't shy away from questioning long-held theories and testing them - not only through extensive research - but also through the crucible of live performance. It does not surprise me that they would tackle the reconstruction of Cardenio or that Gary would take some twenty years to do it. When they're done, Cardenio will certainly stand as a testament to how painstaking line-by-line scholarship can combine with academic imagination to create pure joy." - Jim Simmons, Producer/Writer of 'Shakespeare Lost/Shakespeare Found' TV documentary about 'The History of Cardenio'

"This is, without question, the most important critical anthology on Cardenio to date and essential reading for anyone interested in the fast emerging field of 'lost plays' in early modern England. Not only have Taylor and Bourus brought together essays by a diverse range of international scholars, they include Taylor's reconstructed script and a reminder of the enchanting and ground-breaking production of Cardenio that Bourus directed in Indianapolis in 2012." - Paul Whitfield White, Professor of English, Purdue University, USA and author of Drama and Religion in English Provincial Society, 1485-1660

"Like all good theatrical work, Gary Taylor and Terri Bourus's collection is a collaborative effort, as was the production and colloquium at IUPUI from which it emerged. Taylor and Bourus's collaboration pairs textual studies and theatrical practice, literary analysis and performance studies, detective work and hypotheses scientifically tested with mathematical precision. Taylor's careful excavation of Fletcher and Shakespeare's language from Lewis Theobald's Double Falsehood, Bouros's thoughtful direction of the resulting script - two decades in the making - and the incisive analyses provided on all hands in these pages make of Fletcher and Shakespeare's labor of love lost a Cardenio found." - Regina Buccola, Associate Professor, Roosevelt University, USA

"This splendid contribution to literary and theatrical history proves that the lost Cardenio was co-authored by Shakespeare and Fletcher and that writing by both playrights survives into Lewis Theobald's Double Falsehood." - MacDonald P. Jackson, Emeritus Professor of English, University of Auckland, New Zealand

"This persuasive book should put to rest nearly three hundred years of debate over the lost King's Men play of 1613. Cardenio was indeed a Fletcher/Shakespeare collaboration, based on episodes from Cervantes' bestseller Don Quixote. Lewis Theobald was not a forger: his 1727 adaptation Double Falsehood does derive from Cardenio. With meticulous scholarship and creative theatrical acumen the editors assemble a formidable case, and also triumphantly publish for the first time Taylor's 'unadaptation' of The History of Cardenio." - David Carnegie, Emeritus Professor FRSNZ, School of English, Film, Theatre, and Media Studies, Victoria University of Wellington, New Zealand

"Taylor's team bring us closer to the lost Cardenio in four ways: they render the forgery hypothesis even less convincing, provide more evidence for Shakespeare's collaboration, enrich our understanding of Fletcher's dramatic art, and pay significant attention to the performative dimension of Cardenio-related material." - Brean Hammond, Professor of Modern English Literature, University of Nottingham, UK and editor of the Arden edition of Double Falsehood