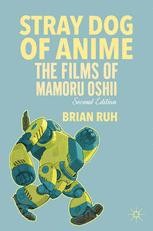 The Films of Mamoru Oshii

Upon its US release in the mid 1990s, Ghost in the Shell , directed by Mamoru Oshii, quickly became one of the most popular Japanese animated films in the country. Despite this, Oshii is known as a maverick within anime: a self-proclaimed 'stray dog'. This is the first book to take an in-depth look at his major films, from Urusei Yatsura to Avalon .

Brian Ruh frequently writes and teaches about Japanese popular culture and film. He holds a PhD in Communication and Culture from Indiana University, USA.

"A fascinating look at a filmmaker who exemplifies the breadth and complexities of modern Japanese cinema." - The Japan Times

"Stray Dog of Anime: The Films of Mamoru Oshii is a solid and wide-ranging look at a director who deserves to be recognized for more than just scantily-clad cyborg women." - Cartoon Brew

"[A] thoughtful, well-researched analysis of what makes Oshii such a fascinating creator." - Otaku USA

"A fine introduction to one of Japanese animation's few true auteurs, Stray Dog of Anime examines Oshii's films from both sides of the camera. Brian Ruh's work is scholarly but readable, and affirmative but critical - an education for academics and fans alike. Welcome to Class Real." - Jonathan Clements, co-author of The Anime Encyclopedia

"Brian Ruh's Stray Dog of Anime: The Films of Mamoru Oshii is the first comprehensive treatment in English on a Japanese director who is by turns familiar, alien, grim, funny, evasive, brutal, ethereal, and deeply human. Readers will begin to understand why the imagination of Mamoru Oshii inspires The Matrix's Wachowski brothers and Titanic's James Cameron. The book will be of interest not only to those who want to get to know Mamoru Oshii, but those who presumed they already knew him well. For those new to Mamoru Oshii, Stray Dog of Anime is the viewer's companion to have. For those already fans, it is likely to provoke at least half-a-dozen new questions." - Carl Gustav Horn, co-author of Japan Edge: The Insider's Guide to Japanese Pop Subculture

"Stray Dog of Anime is a wonderfully accessible introduction to Oshii Mamoru, one of the most brilliant and challenging anime directors working today. It provides a fine overview of the spiritual, aesthetic and political issues that weave through Oshii's work. This book is an excellent resource on a major director, still too little studied in the States. Fans of Oshii and fans of anime in general will find it both stimulating and enlightening." - Susan Napier, author of Anime from Akira to Princess Mononoke

"Ruh deserves attention simply for stepping up to the mat as one of the few writers building a framework for the mature appreciation of anime as a creative form by British and American viewers, but he's also provided an overview of one of the medium's most interesting figures. His synthesis of the available material is accompanied by a passionately argued statement of Oshii's importance as director and auteur. There's plenty to interest students of film as well as anime buffs, and Ruh's thoughts will generate argument in fan circles throughout the English-speaking world." - Helen McCarthy, author of Hayao Miyazaki: Master of Japanese Animation and The Anime Encyclopedia

"Bridging the gap between thorough scholarly analysis and clear, accessible writing for the general reader, Brian Ruh's timely book is a welcome study of a director whose works openly invite closer analysis. Taking a chapter-by-chapter look at Oshii's individual works, beginning with his contribution to the animated TV series Urusei Yatsura (1981-84) through Angel's Egg (1985), a thematic turning point that had some anime fans howling in frustration, he traces the themes and intellectual concerns throughout his body of work leading up to, but not including this latest film. Ruh charts the increasing centrality of such recurrent motifs as the aestheticisation of technology (especially military), the usage of mythological and religious symbolism and allegory as they become further detached from their origins, and the questions of identity and reality in a rapidly changing society - 'how technology alters how one perceives the world.'" Jasper Sharp, editor, Midnight Eye