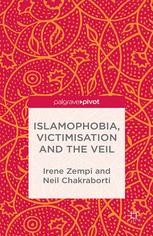 Islamophobia, Victimisation and the Veil

This book examines the experiences of veiled Muslim women as victims of Islamophobia, and the impact of this victimisation upon women, their families and wider Muslim communities. It proposes a more effective approach to engaging with these victims; one which recognises their multiple vulnerabilities and their distinct cultural and religious needs.

Irene Zempi is a University Tutor at the Department of Criminology, University of Leicester, UK. She is also a member of the Advisory Committee for the Measuring Anti-Muslim Attacks Project organised by Faith Matters, a non-profit organisation which hopes to show the scale of the problem of Islamophobia and provide support for victims.

Neil Chakraborti is a Reader in Criminology at the University of Leicester, UK and an Adjunct Professor at the University of Ontario, Canada. He has researched and published widely within the fields of hate crime, victimisation and policing diversity, and is Director of the Leicester Centre for Hate Studies.

"Since 9/11 acts of hate directed at Muslim communities have become one of contemporary society's most significant social issues. Drawing upon their own ground-breaking research, renowned experts Zempi and Chakraborti have produced a superb work that details the harms caused by Islamophobic faith hate targeted against veiled women. Their findings, brilliantly outlined here, offer new and important insights into the nature and impact of gendered aspects of Islamophobia and exemplify why Islamophobia, Victimisation and the Veil will become the key text for scholars and practitioners working in this area." - Jon Garland, University of Surrey, UK

"Zempi and Chakraborti have produced a timely, insightful and authoritative analysis of the nexus between Islamophobia, visibility, victimisation and discourses of the veil. By interrogating the veil as a marker of Muslim 'otherness' they expose how popular stereotypes contribute to intolerance towards veiled Muslim women but also to global relations between Islam and the West. They skilfully blend cutting-edge empirical research with larger critiques of vulnerability and identity to offer a much-needed, accessible and unique analysis of the gendered dimension of Islamophobic victimisation." - Gail Mason, University of Sydney, Australia

"As contemporary hate crime scholarship continues to flourish in Britain, with this book Zempi and Chakraborti have made a significant contribution to our knowledge and understanding of an issue hitherto largely underexplored by the existing literature. There is a wealth of knowledge contained within this accessible volume, and given current political and social discourses, should be read by academics, policymakers, and practitioners alike." - Nathan Hall, University of Portsmouth, UK