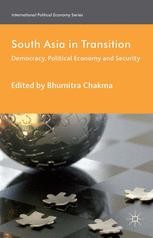 “Chakma make a significant contribution by paying attention to normative and transformative variables that influence political relationships in South Asia. … Bhumitra Chakma’s edited work looks at some of the crucial issues surrounding the South Asian political landscape. … will be beneficial for scholars and analysts of South Asia and beyond, and especially useful for those interested in the future course of South Asian regional integration.” (Stuti Bhatnagar, Journal of South Asian Studies, Vol. 38 (4), January, 2016)

"A significant volume that covers the key dimensions of South Asia's development by locating challenges at institutional and political economic dimensions and most importantly their linkages to security at inter, intra and human security levels. It offers a good set of chapters that link theory and policy successfully." - T.V. Paul, James McGill Professor of International Relations, McGill University, USA

Bhumitra Chakma's edited volume grapples with the complex realities of the region by elucidating the interconnection between democracy, political economy and security, going into the nitty-gritty of each of the processes. This book is a valuable addition to the literature on South Asian affairs and will immensely help students, scholars and all those who are interested to know more about this dynamic region called South Asia.' Partha S. Ghose, former Professor of South Asian Studies, Jawaharlal Nehru University,India

"Change is afoot throughout South Asia, and the rest of the world had best take note. This nuanced, subtle study explores both the sweep and the limitations of those changes. No serious analyst of 21st century international politics should miss this book." - Robert Hathaway, Director of the Asia Programme, Woodrow Wilson International Centre for Scholars, USA