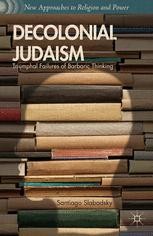 Decolonial Judaism: Triumphal Failures of Barbaric Thinking explores the relationship among geopolitics, religion, and social theory. It argues that during the postcolonial and post-Holocaust era, Jewish thinkers in different parts of the world were influenced by Global South thought and mobilized this rich set of intellectual resources to confront the assimilation of normative Judaism by various incipient neo-colonial powers. By tracing the historical and conceptual lineage of this overlooked conversation, this book explores not only its epistemological opportunities, but also the internal contradictions that led to its ultimate unraveling, especially in the post-9/11 world.

Santiago Slabodsky is The Florence and Robert Kaufmann Chair in Jewish Studies and Assistant Professor in the Department of Religion at Hofstra University, USA. He has been a visiting professor at institutions in Spain, Costa Rica, the Netherlands, Macedonia, Argentina, Canada, and the United States and has published widely in Jewish thought and culture, sociology of knowledge, global south social movements, liberation theology, and decolonial theory.

“Decolonial Judaism is both an intellectual tour-de-force and a pointed critique of the Jewish historical story presented primarily as a Western European event … . In the contemporary moment where colonialism still hovers in the background and decolonialism continues to chart a new and richer redirection in Western thought, Slabodsky’s Decolonial Judaism is an important contribution to this project.” (Steven Leonard Jacobs, Religious Studies Review, Vol. 43 (04), December, 2017)

“This is an extraordinary book. It’s perhaps even ironic and poignant, given the rising antisemitism under a turn to the right in the USA, the UK, and France … . Slabodsky takes such problems head on through a creative and provocative synthesis of theories from the global south. … as this book shows, it should also do so at methodological levels, as the sources, approach, and modes of argumentation are fine exemplars of … the creolization of theory.” (Caribbean Philosophical Association Frantz Fanon Prize 2017 recipients, caribbeanphilosophicalassociation.org, January, 2017)

"Santiago Slabodsky's Decolonial Judaism arrives at the moment when a new wave of Jewish prophetic thought is exploding on the world scene. While recounting how Jews once lived on the margins of societies, forming alliances with struggling peoples across the globe in thought and action, Slabodsky also surveys the peculiar transposition that today finds Jews exercising power over others. But Decolonial Judaism is more than a historical exercise. In these pages we experience the foundational thought necessary for Jews to move beyond being victims or oppressors. Count this book a must read and as a beginning of Slabodsky's contribution to the Jewish and global discourses on justice in the world." - Marc H. Ellis, Professor Emeritus, Baylor University, USA, and author of Future of the Prophetic: Israel's Ancient Wisdom Re-presented

"Judaism is based on principles of believing, sensing, and knowing and, like any other political-theology, is not a homogeneous universe of meaning. Slabodsky is a heterodox Jew whose thoughts and arguments engage identity in politics. Claiming his Jewish identity, Slabodsky is opening a window to join and embrace the struggles of all non-Jews in projects and processes of delinking from institutional managements that only benefit the managers. A must read for all interested in Judaic and Decolonial Thinking." - Walter Mignolo, William Wannamaker Professor and Director of the Center for Global Studies and the Humanities, Duke University, USA.