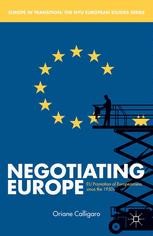 EU Promotion of Europeanness since the 1950s

The book explores the promotion of Europeanness, which aims to arouse feelings of belonging to the European Union. It demonstrates that the promotion of Europeanness at the EU level does not constitute an overarching identity policy that imposes a homogenous interpretation of European identity. Rather, it is a process of negotiation in which various entrepreneurs of Europeanness within and outside the EU institutions invent and communicate representations of Europe. Both the negotiation and the multilayered representations of Europe that it produces are investigated through three case studies: the academia and the historians, European heritage, and the iconography of the euro.

“Calligaro’s book is persuasively argued and thoroughly researched. The three thematic case studies have added up to a challenging, but admirably well mastered research deign. … Oriane Calligaro has … wisely kept her focus tight and invested in the high quality of the empirical research and on conceptual innovation. Scholars of the EU from various disciplines, but also anyone interested in the uses of history, culture and symbols in European politics will find this book very valuable.” (Juhana Aunesluoma, European Review of International Studies, Vol. 2 (3), 2015)

"Negotiating Europe is interesting, enlightening, and highly original. It draws on a wide array of secondary sources and primary, archival material. The book will appeal to historians of the EU and, more broadly, to scholars of European integration and of contemporary European culture and society." Desmond Dinan, Professor of Public Policy and Jean Monnet Chair, George Mason University, USA

"It is taken for granted that European Union institutions have recurrently tried and largely failed to instill a specific European identity among the citizens. In Negotiating Europe, Calligaro provides an original and nuanced account of these policies that questions this top-down approach and present them as much more democratic. Shifting conceptions of Europeanness have resulted from a negotiated process in which cultural entrepreneurs, secondary European Union institutions like the European Parliament or the European Central Bank, and non-institutional actors have played major roles. The outcome of this process has been the emergence of a polivocal and polisemic understanding of what is Europe, whose most resilient feature is a teleological conceptualization of European unification. This book should become required reading for graduate students and scholars interested in cultural policy and the gradual emergence of a European identity." - Juan Díez Medrano, Professor of Sociology, Universidad Carlos III de Madrid, Spain"Much has been written on European identity and symbolic policies of the EU, frequently with a normative agenda and without real empirical ground. This book makes a distinct contribution by combining the conceptual systematization of the political scientist withthe accuracy of the historian. This is a required reading for anyone interested in the role of culture in the legitimacy of contemporary political systems." - François Foret, Professor of political science and Jean Monnet Chair, Université Libre de Bruxelles, Belgium
Show all