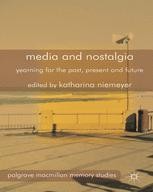 Yearning for the Past, Present and Future

Media and Nostalgia is an interdisciplinary and international exploration of media and their relation to nostalgia. Each chapter demonstrates how nostalgia has always been a media-related matter, studying also the recent nostalgia boom by analysing, among others, digital photography, television series and home videos.

“The book is divided into four sections each dealing with a distinct area of concern. … The scope of the material covered in this volume, and the rigour of the thought provoking chapters within, make this book an extremely welcome and valuable addition to the growing literature on history, memory and nostalgia.” (Mike Chopra-Gant, Historical Journal of Film Radio and Television, 2016)

“Media and Nostalgia draws together a series of fascinating essays that reveal the multi-faceted nature of both nostalgia and the scholarly responses to this slippery phenomenon. It displays a commitment to the meaningful interrogation of a term and a phenomenon that is often “thrown away” in general usage. This multidisciplinary collection benefits from a scope and ambition that includes reflections on nostalgia in relation to a series of media forms: television, film, advertising, print, photography, popular music, art and literature. The collection offers a productive investigation of the usefulness and multiplicity of nostalgia and its many articulations across these varied media sites.” (Amy Holdsworth, University of Glasgow, UK)

“Pervasive in movies, television series, photography and nowadays virtual spaces, nostalgia and its role in media have received little attention in scholarly literature. This book, inspiring, provocative and timely, fills an important gap. It will no doubt constitute a major contribution to memory and media studies and the study of nostalgia.” (David Berliner, Université Libre de Bruxelles, Belgium)

“Nostalgia has become an almost forbidden feeling, denounced and altered by mainstream media. In reality it is often innovative and productive. The volume edited by Katharina Niemeyer is a pioneering work that tackles the question critically.” (Régis Debray, author of “Transmitting Culture” (2004))

“Nostalgia is - more and more - a very ubiquitous phenomenon and the volume ‘Media and Nostalgia' is a pioneering work on the diverse relations of both. Strong theoretical approaches and fascinating case studies are developed and discussed here, revealing the link between the nostalgic boom and the apparent acceleration of time produced by new technologies. The authors concentrate on (social) media content (but not exclusively) as well its uses and show how we ‘nostalgize’ in everyday life. The vintage and retro trend is tackled here within its complexity and goes beyond the idea of marketing strategies by offering very new insights into the study of nostalgia. Nostalgia, as some contributors write, can nourish a critical view on the past and, sometimes, be an element of imagination a better future.” (Géraldine Poels, Institut national de l'audiovisuel, France)