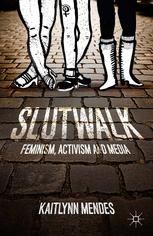 SlutWalk explores representations of the global anti-rape movement of the same name, in mainstream news and feminist blogs around the world. It reveals strategies and practices used to adapt the movement to suit local cultures and contexts and explores how social media organized, theorized and publicized this contemporary feminist campaign.

Kaitlynn Mendes is Lecturer in Media and Communication at the University of Leicester, UK. Her research examines representations of feminism and feminist activism in news, feminist blogs and social media. She is author of Feminism in the News (2011) and Feminist Erasures (edited with Kumarini Silva, 2015).

“SlutWalk … is an important contribution to feminist (social) media activism. I recommend the book for scholars interested in researching media representations of feminism and political activism mobilizing via social media platforms. It can also be of interest for educators who would like to introduce their graduate students to the particular steps of research design in feminist media studies. … it is a valuable contribution to the recording of women’s place in the twenty-first century history of social activism.” (Barát Erzsébet, Hungarian Journal of English and American Studies, Vol. 22 (2), Fall, 2016)

“The author has written an accessible, well-organized, and meticulously researched book that will introduce readers to the SlutWalk movement, as well as provide a broader critique of rape culture, and much needed empirical data on the dynamics of contemporary global social movement mobilization–feminist or otherwise. … an important contribution to future scholarship for feminism and social movements.” (Victoria O’Meara, Feminist Media Studies, 2016)

“Kaitlynn Mendes’ book SlutWalk: Feminism, Activism and Media examines the global antirape movement ‘SlutWalk’ and its coverage in the feminist blogosphere and mainstream media. … Mendes’ monograph has the potential to serve feminist activist groups and antirape activists around the globe by providing contextual and applicable information on a type of march that so many were probably involved in themselves. … As for its use by academics, the book would be ideal for undergraduate or graduate classes … .” (Giuliana Sorce, International Journal of Communication, Vol. 10 (4), 2016)

“The target audience is most likely those already familiar with feminism, or the SlutWalk movement, but anyone interested in these concepts would find the book appealing. The book works well in the classroom covering topics related to media, communication, feminism, activism and women’s rights and it displays one way in which a small grass movement initiated through social media can become a global phenomenon reaching millions of people and inspiring activism.” (Hennie Weiss, metapsychology, Vol. 19 (51), December, 2015)

"Through this detailed and sophisticated analysis of the international phenomenon of Slutwalk, Kaitlynn Mendes provides an important and unique contribution to our understanding of the globalization of feminist activism, violence against women and networked counterpublics. Anyone interested in the use of social media in activism, the representation of feminism in media and popular culture, and how feminist activism is shaped by national context will find Slutwalk to be essential reading." - Marian Meyers, Georgia State University, USA

"SlutWalk is a timely and smart engagement with a critically important 21st century feminist mobilization against rape culture. Mendes' careful investigation of SlutWalks, their organizational strategies, meanings, and their mediation through mainstream news and counter media spheres (feminist blogs), is not only a wonderful resource for feminists and media scholars, it provides one of the few deeply researched case studies of networked social movement mobilizations of any kind in the 21st century. Mendes describes SlutWalk closely and contextualizes the movement carefully within 'waves' of feminism, but she also uses the case study to revisit some classic questions, and to raise some new ones, about the most productive organizational and communications strategies for radical social movements in a networked public sphere. As such, the book will be useful in feminism and in media studies but its impact will also reach beyond SlutWalks to contribute to social movement communications theory much more generally." Bernadette Barker-Plummer, University of San Francisco, USA

"Victim-blaming is alive and kicking women, while rape and sexual assault remain a threat and/or feature in the lives of too many young women today. It is no surprise that young women were ready for new ways to resist and rise up and I welcome this new book on the so-called 'SlutWalk' protests. Another well researched, academically rigorous and engaging new book from Mendes, documenting this thoroughly modern new form of activism. As an organiser of the 'Reclaim the Night' marches I have my issues with SlutWalk, hating the term, and believing still, that the most radical thing women can do in this culture is keep their clothes on. What I share is a belief in an urgent need for dynamic activism of all forms and I welcome this book detailing just one of the ways that women are taking action." Finn Mackay, University of the West of England, UK

"Kaitlynn Mendes provides the thorough investigation that the Slutwalks phenomenon deserves. This book is usefully contextualized, wide-ranging in its theoretical tools, and original in its analysis. Its attention to the feminist blogosphere, social media networks, and organizer interviews is especially innovative, providing important food for thought about the future of feminism and social movements. This impressive study is timely and provocative." Bonnie J. Dow, Vanderbilt University, USA

'Mendes' trenchant analysis of the Slutwalk movement makes compelling reading. It is both a celebration of grassroots feminism in the social media era and captures a movement, which like feminism itself, has many faces. This book is a tribute to the continued relevance of feminist politics in an allegedly postfeminist world. It shows how Slutwalk organizers confronted the ubiquity of rape culture in its many local expressions, narrating the story of feminist online communities with global reach.' Imelda Whelehan, University of Tasmania, Australia