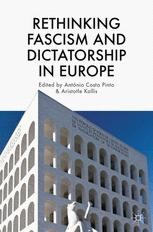 Rethinking Fascism and Dictatorship in Europe

Fascism exerted a crucial ideological and political influence across Europe and beyond. Its appeal reached much further than the expanding transnational circle of 'fascists', crossing into the territory of the mainstream, authoritarian, and traditional right. Meanwhile, fascism's seemingly inexorable rise unfolded against the backdrop of a dramatic shift towards dictatorship in large parts of Europe during the 1920s and especially 1930s. These dictatorships shared a growing conviction that 'fascism' was the driving force of a new, post-liberal, fiercely nationalist and anti-communist order. The ten contributions to this volume seek to capture, theoretically and empirically, the complex transnational dynamic between interwar dictatorships. This dynamic, involving diffusion of ideas and practices, cross-fertilisation, and reflexive adaptation, muddied the boundaries between 'fascist' and 'authoritarian' constituencies of the interwar European right.

“This collection focuses upon the political dynamics that are constructed from a hybrid of historical, nation-centred factors as well as impacts and influences from abroad. … The contributors make a convincing case that existing taxonomies need to be reworked far more than has been the case to date encouraging experts to embrace the hybridity that is clearly highlighted throughout the book. … a valuable addition to the field of generic (para) fascist studies.” (Robert May, Fascism, Issue 5, October, 2016)

“The book’s aim is to look beyond the traditional taxonomies which have dominated discussion of interwar dictatorships … and offer a new diffusional approach which embraces the complexity of such regimes and their various components. … Rethinking Fascism and Dictatorship in Europe will be an important resource not just to scholars of fascism and authoritarian regimes, but also historians studying the political culture of interwar Europe.” (Paul Stocker, Politics, Religion & Ideology, Vol. 16 (1), 2015)

'This important and innovative collection brings together the best recent work on the political dynamics of fascist and authoritarian regimes in inter-war Europe, emphasizing the complexity of their political dynamics.'- Martin Conway, University of Oxford, UK

'This is a fine collection. It provides excellent opportunity for judging the grounds - both convergent and particular - from which democracy was assaulted and contained in central and southern Europe between the wars.'- Geoff Eley, University of Michigan, USA