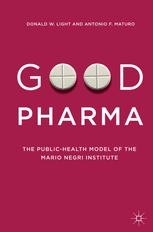 The Public-Health Model of the Mario Negri Institute

Drawing on key concepts in sociology and management, this history describes a remarkable institute that has elevated medical research and worked out solutions to the troubling practices of commercial pharmaceutical research. Good Pharma is the answer to Goldacre's Bad Pharma: ethical research without commercial distortions.


Antonio Maturo is Associate Professor of Sociology of Health at Bologna University, Italy and Visiting Professor at Brown University, USA. He has published several books in Italian and he has edited The Medicalization of Life (2009, with P. Conrad) and The Medicine of Emotions and Cognitions (2012, with K. Barker).

“Good pharma is a fascinating story and a must read for all those who believe that something is not right about the way we incentivise medical research today. Both laypersons and specialists in the field will find something to think about in a book that is full of delectable nuggets of information interspersed in the story of Silvio Garattini and the Mario Negri Institute.” (Amit Sengupta, Indian Journal of Medical Ethics, August, 2016)

“By offering a sociological perspective on the drug development process, this book presents an alternative perspective to mainstream pharmaceutical drug production focused on patenting and profit while ignoring public-health needs. … The book shows how personal life events and experiences collided to lead to the founding of the institute. … a welcome addition to the sociology of health and medicine and would likely appeal to those interested in critical perspectives of pharmaceuticals, health and the regulation of clinical trials.” (Shadreck Mwale, Sociology of Health & Illness, June, 2016)

“The authors document what they see as the generalizable best practices of this pharmacological research institution, which is based in Milan and has centers in two other Italian cities. … Some readers may already be familiar with the litany of complaints about the pharmaceutical industry, as well as the proposed best practices chronicled in Good Pharma. Even for them, the book may be worth reading.” (Jennifer E. Miller, Health Affairs, Vol. 34 (12), 2015)

“Good Pharma tells the story from 1961 to present of the origins and development of the Instituto di Ricerche Farmacologiche Mario Negri, named after its endower, a Milanese jeweller-philanthropist. … Good Pharma is worth reading and digesting as it documents how the Negri model has produced some outstanding successes, such as the GISSI trials, and makes a strong case for viewing pharmacological research as a long-term risky investment.” (Drug and Therapeutics Bulletin of Navarre, Vol. 23 (2), 2015)

“As Light and Maturo write, the Italy-based pharmacological research institution prides itself on “patient-oriented” research rather than a “patent-oriented” model ... . In some ways the Mario Negri approach is not revolutionary: the institute competes for the same grants and contracts as other research organizations. It studies the same types of diseases as other researchers, including breast cancer, epilepsy, and dementia. But it departs from the norm by refusing to pursue patents on the drugs and methods it develops and by pledging open-source sharing of its research data. The institute has also made a commitment not to drop a drug candidate because its profit potential is too low. It is an approach that would have prevented the tragedy of the vaccine for Ebola being unavailable because it sat undeveloped for 10 years due to its perceived unprofitability. The Institute won’t allow industry representatives to ghost-write journal articles for its researchers, and it structures clinical trials to include practicing physicians on the research team, an approach it believes will ensure its research has treatment relevancy.” (Fran Quigley, Professor of Law, Indiana University, USA)

“...a bright light on a remarkable approach to conducting pharmacological research in the public interest...research motivated by a social mission centered on compassion for and responsibility to the vulnerable, sick and suffering.” (Arthur L. Caplan, Mitty Professor of Bioethics, New York University)