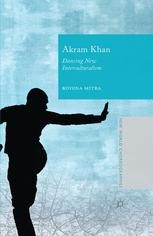 Through seven key case studies from Khan's oeuvre, this book demonstrates how Akram Khan's 'new interculturalism' is a challenge to the 1980s western 'intercultural theatre' project, as a more nuanced and embodied approach to representing Othernesses, from his own position of the Other.

Dr Royona Mitra is a Lecturer in Theatre at Brunel University London, UK where she teaches physical theatre, intercultural performance and critical theory. Her research addresses intersectionalities between bodies, cultures and identities. She has published in Dance Research Journal, Feminist Review and Women & Performance and contributed to volumes on dance and culture.

“This book offers a much-needed intervention in the growing field of contemporary British dance and theatre studies, and is an excellent resource for students, scholars, and practitioners alike – a rich and nuanced choreographic analysis that not only provides readers with an accessible entry point into Khan’s body of work but also lays important groundwork for further study of the social, political, economic, and racial context in which British Asian artists like Khan have emerged.” (Francisco Costa, New Theatre Quarterly, July, 2016)

“With its accessible writing style, its vivid description of dance works, and its clear structure, this book promises to be useful and of interest to readers at various phases of their inquiry into dance and theatre studies: undergraduate and postgraduate students as well as scholars. Its interdisciplinary approach suggests its usefulness to researchers in theatre and cultural studies as well as in dance.” (Janet O’Shea, Theatre, Dance and Performance Training, Vol. 7 (1), May, 2016)

“This is a "go to" book on Khan which will stimulate teaching on the many different dance courses that are established (and still emerging) in HE. But it is much more than that in its focus and claims for Khan’s “new" interculturalism, and in its fearlessness in confronting issues around identity politics: poverty, wealth, homelessness, global belonging, and the privileges that Khan (and those of us who have multiple places we feel ‘at ‘home’ in, belong to)  can enjoy and which enable him to develop his work. We were particularly impressed by Mitra's own location of her position within the work, showing us the development of her critical journey from the inside, from the subjective position of ‘knowing’ and ‘being’, to illuminate the issues still further for readers whether they are outside looking in or fellow insiders looking out and reflecting back that experience  - in both directions.  Mitra sets out the critical field from which her terms are based in an informative and even-handed way that is both thoroughly scholarly and convincing.” (Theatre & Performance Research Association Judges, book won the runner-up award in the New Career Research in Theatre/Performance Prize 2016)

“In a valuable and timely step forward for scholarship on Indian dance, Mitra skillfully combines detailed work on specific artistic works by choreographer Akram Khan with thoughtful sociological analysis. The result is a worthwhile and very readable volume that moves the study of Indian dance into the 21st century.” (Margaret Walker, Queen's University Kingston Ontario, Canada)

“Provocative, eloquent and insightful Akram Khan: Dancing New Interculturalism skillfully captures the complicated 'dance' of migrant, border, diasporic identities through Khan's work as he negotiates the center of western thought and culture by challenging and reshaping it. Mitra writes elegantly and intelligently, with a lucid grasp of the complex realms of postcoloniality, sexuality, and gender in its embodied form and an ability to lithely translate it into intercultural, social, and racial terms. Her argument persuades the reader to consider Khan as a choreographer and weaver of worlds and his canny maneuvers within globalization by laying his body on the line. Her reading of Khan's new interculturalism makes an original and profound commentary on how dance embodies and engenders third spaces in between nation state formation. This should be read not only by dance and theatre scholars but also by postcolonial, and globalization theorists alike.” (Priya Srinivasan, Leiden University, Netherlands)

“Original, insightful, and nuanced, Royona Mitra's Akram Khan: Dancing New Interculturalism investigates Khan's politicized aesthetic as part of an emerging phenomenon of new interculturalism in performance. Rather than representing Khan's choreography as fusion or as innovation, Mitra argues that his work problematizes and destabilizes atomized, homogeneous categories of contemporary and classical, Western and South Asian. This work suggests a progressive potential for new interculturalism as we see choreographers like Khan altering the conventions of Western contemporary dance and physical theater through South Asian aesthetics. With a keen eye for the detail of specific dance works, Mitra shows us that Khan's embodied interculturalism exemplifies the complexity of the present-day British and global experience. Skillfully argued, well researched, and beautifully written, this book is a welcome addition to the literature in dance and performance studies as well as to writings on contemporary British identity.” (Janet O'Shea, University of California, Los Angeles, USA)